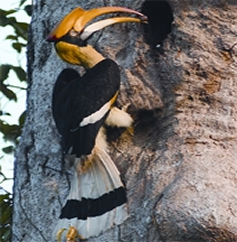 Hornbill (dhanesh) slender-bodied bird of the family Bucerotidae, order Bucerotiformes. It has long eyelashes, a long tail and a massive downwardly curved bill, which it uses to crush insects and fruit. Most live in trees, but a few are ground-dwellers, and grow to a large size. The Southern Ground Hornbill (Bucorvus leadbeateri) is one metre tall. The nesting behaviour of all but two species is notable because the female is sealed in the nest with the chicks and dependent upon the male 'posting' food through a narrow entrance slit.

Horbills are confined to the Old World regions of sub-Saharan Africa and of Asia east to the Philippines and New Guinea. Toucans, some with relatively larger bills than hornbills, are their New World equivalents. There are fifty six species in the whole world. Bangladesh has five species of which three are threatened: one is critically endangered and two are endangered; the status of two species could not be evaluated due to paucity of data (Table). They are found in the mixed evergreen forests of the country. 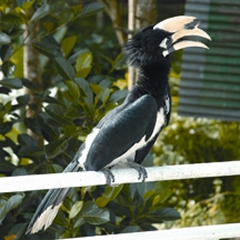 The large bill of hornbills serves a variety of functions including feeding, fighting, preening, and nest-scaling. The head is supported by strong neck muscles and strengthened by fusion of the first two neck vertebrae, unique among birds. The plumage of hornbills consists of areas of black, white, gray, or brown, with very few special developments apart from a loose crest. However, the bill, bare facial skin, and eyes are often brightly colored, with reds, yellows, blues, and greens, and the throat skin may form wattles. In all species, development of the bill and casque indicates the age and sex of individuals, supplemented in many species by differences in colours of the plumage, bare facial skin, or eyes. Males are slightly larger than females, and the shape of their more prominent casques is often indicative of the species, such as in the thin rhinoceros hornbill, Buceros rhinoceros. Each species also has its own loud and distinctive call. Most hornbills are sedentary and live as mated pairs within defended territories, which range in size from 10 hectares up to 100 square kilometres.

Hornbills nest in natural cavities in trees or rock faces, and in most species the female closes the entrance hole to a narrow vertical slit, using the side of the bill to apply mud, droppings, or food remains as a sealant. In some species, such as the Great hornbill, also found in Bangladesh, the male assists by delivering mud and scaling the exterior; and in others the male swallows mud to form pellets in his gullet which are then regurgitated to the female. The entrance is also resealed by half-grown chicks in those species where the female emerges before the end of the nesting cycle. The exceptions are the two species of ground hornbill, which neither seal the nest nor squirt their droppings out of the entrance for sanitation, and which may excavate their own holes in earth-banks or even use old stick nests of other birds. In all species the male delivers food to his mate, and later to the chicks, assisted by group members in co-operative species. Small hornbills lay up to six eggs, and have an incubation period of about 25 days. The female emerges when the eldest chick is about 45 days old, and have a nestling period totaling about 45 days. Large species lay two eggs, incubate for about 45 days, and leave the chick alone when it is a month old even though the nestling period extends to about 80 days. In most large forest species the female remains in the nest until the chick is fledged, a total period of incarceration of four or five months. Females of most species moult while in the nest, casting all flight feathers within a few days of beginning to lay eggs, and regrowing them before emerging from the nest. [Md Anwarul Islam]