Huque, Anwarul (1918-1981) a painter and an art academic, was born on 18 July in 1918 in Uganda in Africa. When he was just eight, he came to Kolkata and got admitted to Kolkata Art School. The Muslim families of his age did not allow painting and in fact it was a taboo to Muslims. Though his guardian did not respect his fondness for painting, he had managed to complete six- year-course in the Art School. Lastly he successfully passed the final examination in 1941. 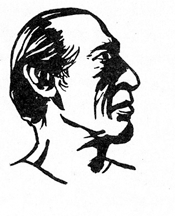 Afterwards, he practiced art independently. Later he completed ‘Teachership’ course.  In 1943, he joined as a drawing teacher in the Faridpur Zila School and thereafter he joined in the Department of Commercial Art of Kolkata Art School. He participated in All India Art Competition held in 1945, and got the top award. After the partition of India in 1947, he became a drawing teacher at the Normal School in Chittagong. After one year, in 1948, he moved to Dhaka and took initiatives to set up the ‘East Pakistan Government Art Institute’ (Presently Art Institute) with joint effort of Shilpacharya zainul abedin,Rafiuddin ahmed, kamrul hasan and others. Since the inception of the institute, he served the Institute as a teacher up to 1977. He had significant contributions to the development of the curricula of the Art Institute.

There are many famous artworks of Anwarul Huque He used both water color and oil color in his works. From the very beginning, he used water color to make realistic artwork and after sixties of the last century, he presented a great deal of art works experimented by oil color. He felt spontaneity to create primordial paintings. National Museum, Bangladesh Shilpokala Academy, Banga Bhaban, Delhi Polytechnic Institute, Pakistan Art Council etc. have on display hiss significant art works. Anwarul Huque passed away on 18 November, 1981 in Dhaka. [Tapan Palit]