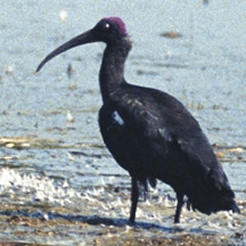 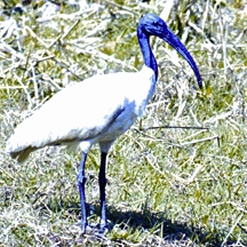 Ibis wading birds of the family Threskiornithidae, order Ciconiiformes, with long legs and necks, and characteristically long, curved, downwardly curlewlike bills. Ibises are strongly linked with wetlands, and wade in shallow lagoons, lakes, bays and marshes, feeding on small fishes and soft mollusks. They fly with neck and legs extended, alternately flapping and sailing. Ibis often nest in colonies, building compact stick nests low in bushes or trees and laying 3-5 eggs. The glossy ibis is found in all continents except south America. These birds are related to spoonbills and belong to the same family. About 25 species of ibis occur worldwide; Bangladesh has 3 species.

Black Ibis (Kalo Kastechora, Duchora) Pseudibis papillosa: a black bird with long down-curved bill, a conspicuous white patch near the shoulder, and brick red legs. Naked black head is with a triangular patch of crimson warts on the crown. Sexes alike. Found in pairs or scattered parties on the open countryside. Parties fly in V-formation by steady wing beats alternated with short glides. Call: a loud, nasal screaming cry or 2 or 3 notes reminiscent of the Ruddy Sheldrake, uttered mostly on the wing. Nesting: March-October. Eggs: 2-4, bright pale green, either unmarked or with spots and streaks of brown. Distributed in the coastal areas.

Black-headed Ibis (Kalomatha Kastechora, Kastey-Chora) Threskiornis melanocephalus a large white bird with naked black head and neck, and long, stout, black, down-curved curlewlike bill. In breeding plumage some slaty grey on scapulars and in wings, and ornamental plumes at base of neck. Sexes alike. It is the size of a village hen. Seen in parties in marshes. It is a close relation of spoonbill. Like storks and the spoonbill, it lacks true voice-producing mechanism and is silent except for peculiar ventriloquial grunts uttered when nesting. Nesting season: June-August. Two to four bluish or greenish white eggs are laid. This species is widely distributed.

The sacred ibis Threskiornis aethiopicus had great importance in the everyday life of the ancient Egyptians. To these people certain animals symbolized individual gods, and the animals were worshiped as divinities. The sacred ibis was a symbol of Thoth, the god of writing and wisdom. A marvellous papyrus painting depicts the ibis-headed Thoth at the after-life ceremony that involves weighing the heart of a deceased person. If the heart outweighed the feather of truth and judgement, it would be devoured by another animal-god; the result was recorded by Thoth, who reported it to the assessor-gods. Live birds were kept in temples and were mummified after death. Possibly, many of these were nestling birds that died of natural causes and were collected by the animal-protectors as a sign of respect. Unfortunately, the ibises' importance in human culture did not stop this species from becoming extinct in Egypt by the mid-nineteenth century, although it still thrives elsewhere. [Md Anwarul Islam]