Jagannath College established in 1868 by a zamindar named Jagannath Roy Chowdhury of Baliati in Manikganj. It was turned into a college on 4 July 1884. The Bangladesh Government later transformed it into a full-fledged university in 2005. 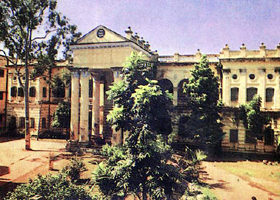 Through a proper deed, on 1 March 1907 a trusty board comprising of Kishorilal Roy Chowdhury, Roy Chandra Kumar Dutt Bahadur and Anand Chandra Roy was formed to look after the management of the College. After the death of Kishorilal Roy Chowdhury, the trusty board was reconstituted according to a new deed written on 24 August 1909. The new board consisted of the following members: Roy Chandra Kumar Dutt Bahadur, Anand Chandra Roy, Joshudalal Chowdhury, Kumar Romendra Narayan Chowdhury and Dinesh Chandra Roy. At this time, with the efforts of Sir Robert Nathan (Commissioner of Dhaka), Mr H Le Mesurier and Mr Bonham Carter, the College received a fund of 80,000 takas, which was used to build a two-storied building. This building now stands at the centre of the campus and is used as the administrative office. At the beginning, the College had only 48 students, which was increased to 500 by the year 1910. At that time honours courses in English, Philosophy and Sanskrit and MA course in English were taught along with the usual IA, ISC and BA (Pass) programmes. The number of students rose to 843 (540 at intermediate level and 303 in third and fourth years) in 1917-18.

In 1910 the zamindar of Santosh (in Tangail) Raja Monmath Roy Chowdhury affiliated Promoth Monmoth College in Tangail with Jagannath College with the permission of the College council. He made a residential house for the Principal next to the main gate of the College. Neither the gate nor the house exists now. The gate actually was situated about 10-15 cubits away from the present liberation war sculpture at the campus. The L-pattern building was south of this gate; its one arm extended from south to north and the other from east to west. Beyond the south wall, there was space for gardening so that a Principal of refined taste could plant flower trees there.

In 1919 the Calcutta University Commission considered the possibility of establishing a university in Dhaka, as there was a need and great prospect to start a higher learning institution in the region with the graduate students of Jagannath and Dhaka Colleges. At that time, a report by the Calcutta University Commission stated that Dhaka College was the 'most important and best equipped' college in Dhaka and Jagannath College was renowned as an 'affiliated and government aided first grade' institution in the subcontinent among the educated elite. Since Dhaka College was a government institution, there was no technical problem to get students from here; but, as Jagannath College was a privately funded institution, there was legal complication about transferring students from there to the proposed Dhaka University.

For this reason, the Indian Legislative Council had to intervene, and it passed the Jagannath College Act (Act No XVI of 1920). The Jagannath College Trustee Board was abolished by the Act and the whole property of the college is vested to Bengal Governor. Dhaka University was established on 1 July 1921, and its classes were mainly started with the students of Jagannath and Dhaka Colleges. At that time, the total number of 2nd and 3rd year students at Jagannath College was 303. After these students were transferred to Dhaka University, Jagannath College was turned into an intermediate college and was renamed Jagannath Intermediate College. This devaluation of the College dismayed the then Principal Ray Bahadur Lalita Mohan who delivered a passionate speech to express his grief and to restore its original status.

Since Dhaka College and Jagannath College provided immense support to the newly established dhaka university, two halls of the University were named as Jagannath Hall and Dhaka Hall (now Dr Muhammad Shahidullah Hall) in recognition of their contribution. All reunion ceremonies of these two halls were celebrated in association with the students from these two Colleges. Jagannath and Dhaka Colleges helped the Dhaka University at its inception not only with students, but also with teachers and books from their libraries. It is worth mentioning that Dhaka University Library started with books from these two Colleges. When the Jagannath College Act was passed, its Trusty Board was replaced with a College Governing Body whose first meeting was held on 20 August 1921. The Governing Body was composed of the following members: T Emerson,' (Commissioner, Dhaka Division) (Ex Officio President of the Body); Khan Bahadur Khaja Mohammad Azam Khan; Nawab Khaja Mohammad Yusuf Khan Bahadur; PK Bose; Sarat Chandra Chakraborty; Rebati Mohan Das; Dhirendra Chandra Roy; and Rash Behari Bose (acting Principal).

The golden jubilee of Jagannath College was held on 20 March 1935 and was chaired by the zamindar of Santosh, Raja Monmath Roy Chowdhury. In July 1936, the number of students of Jagannath College was 737; 832 in September 1936, and it increased to 1700 in July 1947. The College restarted B.Com and BA courses in 1948-1949 and night courses were introduced afterwards. During this time, co-education was abolished from the College. BSc course was introduced in 1959. The number of students including those studying BSc reached 4500 in the year 1964. The College became a full government institution on 1 August 1968, which was followed by government attempts to bring about structural changes in it. It was turned into an intermediate college, and the Jinnah College (now Titumir College) was established in Mohakhali in Dhaka. However, because of pressures from teachers and students, Jagannath College was restored to its previous status within a year, i.e., degree (bachelor level) classes were resumed. The Government dispatched letters to all teachers of the College and reinstated them as professors and lecturers (the existing two tiers of teaching staff in government rules at that time). From among the total number of teachers, 26 were appointed professors and 44 lecturers. No teachers were sacked or transferred.

When honours courses were introduced in 1972 and Masters courses thereafter, the number of students started to increase exponentially. Intermediate class was closed down in 1982, and at that time night courses were kept only for BA, BSc and BCom. In 1992, the College introduced night courses for MA (part 1 and 2), degree (bachelor) pass course was abolished, and the number of students reached 25,000. In 1992, the number of teachers jumped from 250 to 380 including 12 demonstrators. In 2002 there were 35,000 students at the College.