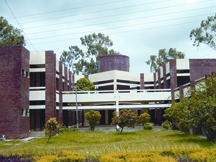 On the basis of this plan a place called Salna in Gazipur district was first earmarked and the foundation stone was laid by Field Marshall Ayub Khan, the then President of Pakistan. Due to some administrative difficulties, this site was abandoned and the present site was chosen, and accordingly 750 acres of land had been allotted for the university and the land was taken away from the Government Dairy Farm, east of the present campus in 1967. Later on about 50 acres of the University land was taken away from the Government Dairy Farm again in 1967. The university project started its implementation in April 1968 as Jahangirnagar Muslim University and Professor Surat Ali Khan was made the first Project Director. On 20 August 1970, an ordinance was promulgated to start the academic programmes of the university. Professor Mofizuddin Ahmed, the then member of the Central Public Service Commission of Pakistan and formerly Professor of Chemistry, University of Dhaka, was appointed as the first Vice-Chancellor. He joined as vice-Chancellor on 24 September 1970. The earlier aim was to establish this university as a science oriented university. For that purpose five faculties, namely, Faculty of Arts and Humanities, Faculty of Social Sciences, Faculty of Biological Sciences, Faculty of Basic Sciences, Faculty of Applied Sciences were earmarked. However, the university was started later with 4 honours departments called viz Economics, Geography, Statistics and Mathematics. The university started with 21 teachers in these departments. Professor Malik Khasru Chowdhury was the first Dean of the Social Science Faculty. Two Professors were appointed, one for Chemistry and another for Physics to start the groundwork to open new departments. The first group of students, a total of 150, was enrolled in four Honours departments. The initial class was held on 4 January 1971. Its formal inauguration was delayed until 12 January 1971, when the university was formally launched by Rear Admiral S M Ahsan, the then Governor of East Pakistan and the Chancellor of the University.

The university started in full swing when professor Syed Ali Ahsan joined as the second Vice-Chancellor in 2 February 1972. The university is residential; every student has an accommodation in one of the residential halls of the university. 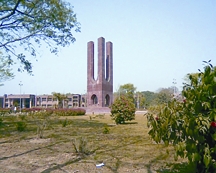 The Chancellor also appoints the Pro-vice Chancellors and Treasurer of the university. Treasurer is to exercise general supervision over the funds of the university. Academic Council, Board of Advanced Studies, Faculties and Committee of Courses are responsible for the academic matters. The Deans of the different Faculties are elected from their respective Faculties once every two years up to the level of Associate Professor. The chairmanship of the Department rotates among the senior teachers of the respective departments for three years.

There is an open-air amphitheatre, the very first one in the country, inside the campus is the main venue for the socio-cultural programmes. A Teacher-Students Centre (TSC) is also established for various club activities for teachers and students. There are two famous statues, known as Samsaptak, in front of the Central Library and Amar Ekushe in front of the Social Sciences building. In 2010, the university has 29 departments under 5 faculties, 2 institutes, 6 male and 5 female residential halls, a total of 12,340 students, 570 teachers and 1555 officials. [Mesbah-us-Saleheen]