Jail a particular structure or building meant for confinement of the prisoners once known as 'Red Fort', and fixed under general or special order of the government as permanent or temporary prison. In Bangladesh, there are three types of jail like Central Jail, District Jail and Special Jail. 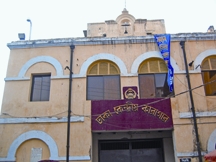 In 1552, the palace named St Briget's Well in London was used as the first jail. The British government established few other jails in 1597 and had a plan in 1600 to establish jail in every county of London. Initially the detainees had to give physical labour in the jail. In the eighteenth century, Goal or jail was identified as a death hole. All male and female prisoners were kept together in a house devoid of light and air. This system was changed consequent upon the harassment of the female detainees. Between 1773 and 1790, social reformer John Howard had occasional visits to the jails and he wrote series of articles on the conditions of the prisoners. Consequently, a substantial change was made in jail management. In 1812, the first national jail styled as Millbank was founded in England.

The first government jail in USA was established in 1790 in the state of Philadelphia which was named as Walnut Street Jail. Jail was established in New York City in 1796 and in the state of Mariland in 1829. Later, a school was established there for the captives. In 1832, the authority of Georgia prison enforced a provision for exemption of two days' imprisonment per month for good conduct and various types of punishment for misconduct. In 1831, the Vermont jail authority for the first time allowed the prisoners to write letters to their relatives.

During the reign of Emperor Ashoka, the prisoners having death sentence were kept in a solitary cell for three days tied with ropes. There were some inbuilt-prisons in the forts of Mughal rulers, which were administered by the concerned authority on their verbal orders. The same kind of prisons were maintained by the zamindars too. east india company gave a new look to the management of prisons. The Company enforced Bengal Code 1818 for detention of the political prisoners. In 1836, the jails were built in districts and sub-divisions. The present jail in Dhaka, Rajshahi, Jessore and Comilla were built at that time. After the promulgation of Code of Rules in 1864 a coordinated management and administration of jails was introduced. In April 1927, the first Borstal Institute was established for the juvenile at Bankura in India. In 1929, the prisons in undivided Bengal such as Presidency jail of Kolkata, Alipur Jail, Midnapur Jail, Dhaka and Rajshahi Jails were declared as central jails. After the liberation in 1971, Bangladesh had 4 central jails, 13 district jails and 43 sub-jails.

The prisoners coming to the jail are of two categories, Hajati and Kaedi. The jail management conveniently divides the prisoners into several groups such as civil prisoners, under trial prisoners, female prisoners, male prisoners below the age 21 years, male prisoners below adulthood and various other convicted male prisoners. The under trial prisoners, subject to attendance before the court on specific dates, are called Hajati, while the convicted prisoners are called Kaedi. The prisoners are engaged in work in the jail as per their physical ability and previous experience. These assignments include management of the wards, vigilance on the prisoners, writer of the jail hospital, letter writing, cooking, supply of water, and functions of book-binding, hair cutter and sweeper. They are also engaged in the production of handicrafts made of wood, cane and bamboo works like handloom operation, tailoring, blacksmithry etc. The Hajatis are not generally assigned to any job. The prisoners are separately kept in wards as per serial of the first letter of their names and on the basis of their age.

The prisoners in the jail are given food three times a day. They are offered breakfast with molasses and bread, lunch and dinner with meat or fish, vegetables or pulse. The first and second class prisoners get better meal than the ordinary prisoners. However, the meal is supplied to the patients in jail hospital depending on their nature of diseases.

For entertainment, the prisoners are allowed indoor and outdoor sports facilities inside the prison and they can watch television in prison barrack. For the treatment of the prisoners, doctors, pharmacists and jail nurses are deputed in the jail hospital. Hospital facilities are provided for the treatment of the prisoners in each and every jail of the country. Medicines are supplied to the patients free of cost. In every jail, library facility is available. The officers and employees serving in the jail can place their grievance to the authority through the system of Darbar held inside the prison.

Initially the major objective of the establishment of jail was to punish the offenders. Now it is being used both as place of punishment and as reformatory. A training programme has been introduced in each of the jails to rehabilitate and establish the prisoners in the society. Various training programmes are conducted in the jails for the female prisoners such as stitching and tailoring, manufacture of paper bag, envelope and shopping bag. The male prisoners are trained up to prepare banner or signboard, fish cultivation, manufacture of paper packet, repairing of electronic appliances. The illiterate prisoners are literated under mass literacy program and are given religious lessons by the Imam of the jail mosque. These programmes are conducted by the joint venture of the jail instructors and the voluntary service of the educated prisoners. The list of daily meal of the prisoners.

The death sentence of the prisoners awarded by different courts is executed in the jail. As per the Jail Code, the convicted prisoners are used to be bathed and utter words of repentance according to the behest of his/her religion (tauba in case of Muslim prisoners) and carried to the gallows. Then galloping the string around the neck of the convict the Jallad (hang-man) executes the hanging. During the execution, the Jail Super, one first class magistrate, a doctor and concerned officials remain present on the spot. The gallows for hanging are available in every central jail and also in greater district jails of the country. Until nineteenth century, the convicts were openly hanged, but later the process is carried out inside jail. In the states of the USA where rifle culture was prevalent, the execution of death sentence was made by firing. The death sentence was kept suspended in the USA between 1972 and 1976. Since 1976, the death sentence is executed in USA by pushing mortal injection.

The prison guards are responsible for maintaining law and order situation in the jail. They were found to perform their duties in 1788 in the Indian subcontinent wearing brownish half shirt and half pant with leather belt around their waist, band of cloth on the legs, turban on head and spear in hand. Subsequently, the guards on duty had black cap, brownish full shirt, full pant, web-belt, boot and 303 rifle in hand. Presently, they are wearing deep-green uniform.

The fort built by Mughal subadar Ibrahim Khan presently accommodates the Dhaka Central Jail. Once there were court building, mint, recreation room and shahi mahal inside the fort. Later the fort was the residence of the naib nazim of Dhaka. Under the rule of the East India Company, the fort was converted into a Jail. In 1765, there were ten wards in the jail with accommodation for 500 to 550 prisoners. With the annexation of a criminal ward in 1788, the Dhaka Central Jail came in operation.

The Jail bell known as 'pagla ghanta' is an integral part of the jail. Such bell is placed in front of the main entrance of every jail. Under special circumstances the bell is rung to alert the concerned, especially when any prisoner is escaped from or any mutiny is broken out in the jail.

Rajshahi Jail is one of the oldest jails in undivided Bengal which was established in 1840. The jail is also mentioned along with the Dhaka Central Jail in Article III of Chapter II of Bengal Jail Code. A few historical relics of British and Pakistani period are still preserved inside the campus of Rajshahi Central Jail. The historic Khapra Ward is one of them.

Upto 6 June 2010, the total number of prisoners in the jails of Bangladesh was 77,805. This number is much more than the capacity of the jail accommodation. As a result, the construction of 27 new jails is on the edge of being completed, and the construction of 18 more jails in now under process. As per the jail code, a prisoner is required 36 square feet of space for sleeping. But due to congestion, the prisoners are bound to sleep by turns. As per the estimate of 2010, the number of foreign prisoners both convicted and under trial in different jails of the country stands as 1048. Among them, 666 prisoners are from Myanmar, 349 Indians, 21 Pakistanis, 3 Tanzanians, 6 Nepalese and one each from Japan, Malaysia and Hungary. [ASM Zahirul Islam]