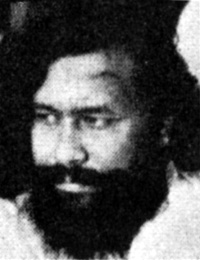 Jalil, Major Mohammad Abdul (1942-1989) army officer, politician. Mohammad Abdul Jalil was born on 9 February 1942 at Wazirpur in Barisal district. His father Janab Ali Sikder was a petty businessman at Wazirpur. Abdul Jalil passed the matriculation examination from Wazirpur WB Union Institution in 1959, IA examination from Murry Young Cadet Institution (Pakistan) in 1961, and joined the Pakistan army as a trainee officer in 1962. While in service in the army he obtained his graduation and MA degree in History. Abdul Jalil was promoted to the post of Captain in 1965, and was elevated to the position of Major in 1970.

In February 1971, Major Jalil came to Barisal on leave from his place of posting in Multan, and later joined the war of liberation. He was initially appointed as sector commander of the Sector 9, but was, however, removed from the position in the month of November.

Major Jalil had pioneering role in floating the new political party Jatiya Samajtantrik Dal (JSD) in October 1972. At the inception of the party he was the joint convenor, and was elected chairman of the party in the council session held on 26 December 1972. The JSD under his leadership endeavoured to establish ‘scientific socialism’ in the country and was altogether active in anti-government politics.

Major Jalil contested from seven constituencies in the Jatiya Sangsad elections in 1973 with no return. Major Jalil was arrested while launching a programme of the party activists to besiege the official residence of the then Home Minister on 17 March 1974. He was released on 8 November 1975. Major Jalil was again arrested on 25 November by the martial law government for his alleged conspiracy for the overthrow of the government and attempts at usurping the state power. He was sentenced to life long imprisonment in a trial by the special military tribunal on 18 July 1976. He was, however, released on 24 March 1980.

Major Jalil contested in the presidential election in 1981 as a nominee of the three-party alliance of Jatiya Samajtantrik Dal, Workers Party and Krishak-Sramik Samajbadi Dal. He was removed from chairmanship of the party by the national committee of JSD in 1984. He then left JSD and floated a new party styled as Jatiya Mukti Andolan through which he launched a programme for Islamic movement.