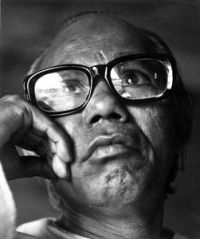 Jayenuddin, Sarder (1918-1986) fiction writer, was born in a peasant family in the village of Kamarhati in pabna. His real name was Muhammad Jayenuddin Biswas. After matriculating from Khalilpur High School in 1939, he studied IA at Edward College, Pabna. In 1941 he started working as a clerk for the army. Subsequently, he worked on the staff of the Dainik Pakistan, sangbad, ittefaq and bangladesh observer, and also at various institutions such as the bangla academy, National Book Centre, Bangladesh Textbook Board etc. He retired in 1980. From 1955-56, he also edited the Setara and Shahin, children's magazines published by the Pakistan Cooperative Book Society.

He portrayed contemporary society and strove for the welfare of the general masses. Anek Suryer Asa, about the hopes that attended partition, merited him the Bangla Academy Award (1967). He also received the Adamjee Literary Prize (1967) for fiction. He died in Dhaka on 22 December 1986. [Mohammad Daniul Huq]