Jaykali Temple a Hindu Temple, located at Thataribazar in Dhaka. The temple is actually a set of two temples established together. One is the temple of goddess Kali and the other of god Shiva. The later is basically a monastery (Math) with an octagonal conical-shaped tower of about 21m height. The roof of the tower is vertically divided into seven parts and those were decorated with various designs. The lowest part was designed like a roof of the traditional thatched house where idols were setup. Finishing of the statues was not perfect as unskilled artisans built those. 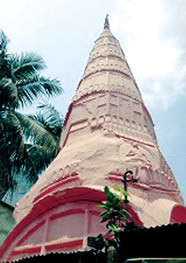 Perhaps the construction workers themselves took the responsibilities to make the statues. The next part contains a design of a thatched house roof depicting motifs of inverted bell and expanded hood of serpent. The design of next three upper parts is similar. The top part is decorated with the design of foliage and flowers. On the top of the tower, a metal pitcher with a trident on its head was set up. The European church architecture influenced the architect of the Shiva temple to deign and build up the conical-shaped tower and of the god Shiva is installed inside the shrine.

The shape Kali temple is rectangular and the roof is designed by five jewels namely Ruby, Diamond, Coral, Shaffire and Pearl. It has an anteroom (garvagriha) and a mandap-roofed terrace for assembling the worshippers with four sides open. Generally idols are installed in the garvagriha in all these shrines but exceptionally the image of goddess Kali of this temple was set up in the mandap. There is a different opinion which says the structure might be reinstalled from the anteroom to the present position later. At present, there are three Shivalingas (phalluses or phalli) in the anteroom. Beside the anteroom, a new passage to enter the shrine has been constructed. The architelctural deign of the Kali shrine was the replication of Five Jewel Temple (Pancharatna Mandir), a popular architectural form of Five Jewel Temple developed in Bengal as it derived from the traditional thatched roof. This tradition was dominating in designing of Jewel Temples in East Bengal, while such temples with tower design became prominent in West Bengal. Four corner towers of the temple was designed and constructed following this traditional school of architecture. But the central tower was designed as conical-shaped. Roof of the temple was built over the anteroom and it looks like a gumbad from the interior. An archway to enter the shrine from the mandap to the anteroom was there, but it has been shut down later.

It is beleived that in the late eighteenth century or in early nineteenth century Dewan Tulshinarayan Ghosh and Naranarayan Ghosh founded the Joykali Temple. The Shiva shrine was also founded at the same time. Besides. In the Kali Temple, idols of goddes Kali, Banadurga and Laxminarayan, Shivalinga, Shalgram Chakra (wheel) were installed. On the other hand, guesthouses and other logistic services for the worshippers were set up in the Shiva temple. The local Zamindars donated property having an annual income of Rupees 1200 to meet up the expenditure of worship-rituals, maintenance of temples and idols, food and accommodation of the guests. After the tenure of third priest Panchananda, the zamindars confiscated the temples and brought those under there direct control as a property endowed for defraying the cost of worshipping. With the passage of time, some of the architectural features of three shrines were destroyed. [Mokammal H Bhuiyan]