Jora Bangla Temple is situated in the Khalia village of Madaripur. The Zaminder of Khalia Raja Ram Roy built this two-storeyd temple in the seventeen century AD. The temple has six chambers in the lower part while three on the upper. The lower storey has a rectangular roof with five arches. The upper storey has also five arches but smaller in size. 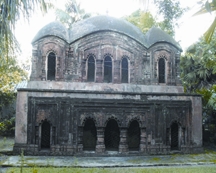 The construction of this rectangular temple is different from that of other temples. The middle one of the three chambers in the upper storey is large and flanked by two other smaller chambers. All three chambers have roofs constructed following the style of the traditional pitch-roofed houses. The middle chamber has three arches while the two chambers at its sides have one arch each. Once, the exterior walls of the currently dilapidated temple were ornamented with Terracotta tiles, which depicted different parts of ramayana and mahabharata. At present those are no longer existed. [Nasrin Akhter]