Jute dicotyledenous fibre-yielding plant of the genus Corchorus, order Tiliaceae. Jute was once known as the golden fibre of Bangladesh, since it was the most important cash crop for the country. Jute fibre is produced mainly from two commercially important species, namely White Jute (Corchours capsularis), and Tossa Jute (Corchorus olitorius). The centre of origin of white jute is said to be Indo-Burma including South China, and that of tossa Africa. The word jute is probably coined from the word jhuta or jota, an Orrisan word. However, the use of jutta potta cloth was mentioned both in the Bible and Monushanghita-Mahabharat. This indicates the ancient uses of jute materials by the people of these areas. There is evidence of the trade of jute cloth in the 16th century. ain-i-akbari (1590) mentions sackcloth originating from Bengal. Jute grows under wide variation of climatic conditions and stress of tropic and subtropics. 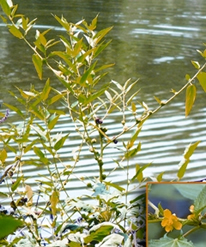 It is grown in Bangladesh, India, Myanmar, Nepal, China, Taiwan, Thailand, Vietnam, Cambodia, Brazil and some other countries. Bangladesh used to enjoy almost a monopoly of this fibre commercially; its share in the export market was 80% in 1947-48 but in 1975-76 it fell to only 25%. This fall in the world market was due to the fact that many countries had started growing jute and allied fibres. The substitutes of jute are multiwalled paper bags, poly-propelin, polythylene, and natural fibres from kenaf, hemp, sida, sunhemp, etc. Jute fibres are used in hessians and gunnies, carpet and rugs, paper, canvas, tarpaulin, handicrafts, etc. Dundi (UK) purchases high class jute of all grades, particularly white and tossa. Belgium, Italy, USA, South America are the buyers of superior quality jute. Jute was cultivated in ancient times in Bengal.

At that time it was more or less a garden plant and its leaves were used as a vegetable and for medicinal purposes.

Jute grows well where the annual rainfall is 1500 mm or more, with at least 250 mm during each of the months of March, April and May. The optimum range of temperature required is 18°-33°C. Jute is cultivated in the rainy season. In Bangladesh sowing usually starts at the end of February and continues up to the end of May, depending on the species.

Cultivation largely depends upon pre-monsoon showers and moisture conditions. C. capsularis is more water tolerant and thus generally can be grown in low lands, and even under water logging conditions, while C. olitorious is more susceptible to water logging and hence cultivated in medium to lower medium lands. Jute can be grown in a number of soil types, ranging from clay to sandy loam with optimum fertility, and soil pH ranging from 5.0-8.6. 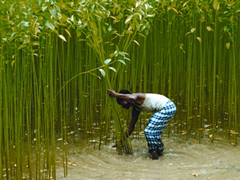 Jute is basically self-pollinated and has fourteen diploid chromosomes. It needs long day light for growth. After sowing, four to five months are needed for harvesting of crops. This is done at the flowering stage. The fibre is obtained from the bast or phloem layer of the stem. Jute cultivation is labour intensive and is mostly grown by marginal, poor, and small landowners. For successful cultivation, land preparation is very important. It needs 3-5 times cross ploughing and laddering for uniform smooth soil, which must have more than 20% organic content. Cow dung is generally used, along with NPK in appropriate proportion, according to the soil type. In Bangladesh farmers generally do not use any fertiliser in jute cultivation. However, when used it must be applied in three stages; one at land preparation, and two as top dressing at appropriate time. During cultivation weeding is usually done in addition to thinning.

Generally, 10-12 kg/ha seed is sown by the broadcasting method. In line sowing, lower amount of seeds is required. Traditionally, farmers keep a small part of the crop area for growing seeds until the seeds mature in October/November. After harvesting, plants are bundled together with required number of plants, and kept standing for 5-7 days in the field for shading off the leaves. Then the bundles are put under water. Clear slow flowing water is the best thing possible for good retting. After 12-15 days, when proper retting is completed, the fibre is separated from the stick by hand and then washed and dried in sunlight. After drying, farmers sell the fibre in the local market.

Although jute is grown in almost all the districts of Bangladesh, Faridpur, Tangail, Jessore, Dhaka, Sirajganj, Bogra, and Jamalpur are considered the better growing areas. Total area under the crop is estimated to be 559,838 ha and the total production about 5310,500 bales. bangladesh jute research institute (BJRI) so far has developed about 27 high-yielding and good quality jute cultivars. 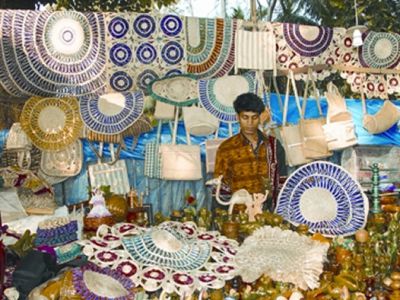 Jute products Jute and jute-based products are put to a wide range of uses. Since antiquity it has been used as a raw material for packaging. Before being used as a commercial commodity it was used in different parts of the world to make household and farm implements such as ropes, hand made clothes, wall hangings, etc.

In Bengal sacks and saris made of jute were commonly used in the Middle Age. Export of sacks started in the 18th century. Its leaves and roots were used as herbal medicine, and as vegetable by the local people. Its use as an industrial commodity began in the Crimean war when it was used as a substitute of flax. Its use was popularised primarily in Western Europe, particularly at Dundee. Traditionally, use of jute products are limited to packaging materials like twine, hessian, gunny bag, twill, carpet backing, wool pack, tarpaulin, mats, canvas, wall cover, upholstery, and as furnishing fabrics of different types and natures. 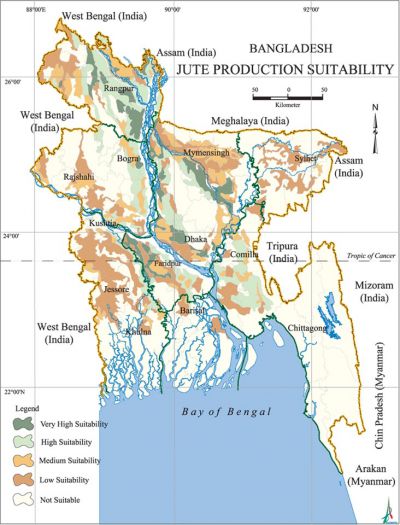 Jute research Jute being a cash crop, by 1900 a fibre expert was appointed by the government of undivided Bengal at the direction of the India Government. He developed a number of superior varieties like Kakya Bombai, D154 (Dhaka 154), and CG (Chinsurah Green). In 1938, the Indian Jute Research Institute was established at Dhaka and technological laboratory was set up at Tullyganj in Kolkata. Jute research was once again initiated at Dhaka through the creating of the Central Jute Committee in 1951 by the Ministry of Agriculture. A Jute Research Institute was established at Tejgaon, Dhaka, in 1957. Located on Manik Mia Avenue at Sher-e-Bangla Nagar, the Institute is now named as Bangladesh Jute Research Institute.

The Jute Regulation Directorate was established in 1940 by the provincial government for the regulation of the crop. This department was setup to regulate the cultivation and production of jute and to ensure that it was grown in fixed areas and to see farmers did not grow it more areas than assigned. A Jute Board was set up in 1949 which used to regulate the entire jute trade, and was assisted by the Jute Trading Corporation, Jute Price Stabilization Corporation, and Jute Marketing Corporation. In 1973 the Jute Division was created and put under the direct control of the Finance Ministry so that it could look exclusively on various aspects of jute. In 1976 this Division was converted into full-fledged ministry. Now the International Jute Organisation has its head office in Dhaka. [ABM Abdullah and Md. Anwarul Islam]

Diseases of jute both the species of jute, Corchorus capsularis and C. olitorius, suffer from a number of diseases. Of these the most important is stem rot caused by Macrophomina phasiolina. The pathogen may cause infection and damage at all stages of growth of the plants, right from seedling emergence to maturation.

The fungus is primarily seed borne, and over winters in crop residues and soil in the form of sclerotia. Many races of the fungus have been reported from Bangladesh and West Bengal, India. The pathogen is known to have several alternate hosts like cotton, sesame, legumes, and brinjal.

Destruction of crop residues, field sanitation, and crop rotation with non-host crops reduce infection in the following year. Pre-sowing seed treatment with fungicides like Vitavax, Homai, and Cupravit are often recommended. Some common diseases are: Black band- caused by Bitryodiplodia theobromae, Anthracnose- caused by Colletotrichum corchorum, and the disease occurs on the varieties of Corchorus capsularis only, Soft rot- caused by Sclerotium rolfsii is commonly seen in all jute growing areas of Bangladesh, Powdery mildew- caused by Oidium sp produces whitish to ash coloured powdery growth on the leaves, Root knot disease- caused by the nematodes Meloidogyne incognita and M. javanica, and Mosaic disease- caused by virus, usually common in Corchorus capsularis. Leaf spot caused by Phyllosticta sp is quite common. [Abul Khair]

Pest of jute The jute crop at all of its growing stages is infested by over two dozens insect and mite pests. As a result, both the quality and quantity of the crop is affected. It is estimated that under certain conditions the loss of jute production due to pest damage alone may be as high as 12 percent or more. However, the intensity of damage varies in different areas and in different years. The incidence of pest infestation largely depends upon weather conditions, variety of jute, method of cultivation, and the presence of predatory and parasitic organisms. Of the commonly encountered pests, a few are considered as major, while the others are treated as minor. If environmental conditions become favourable, a minor pest may attain the rank of a major pest.

Of all the pests, the jute hairy caterpillar, Spilosoma obliqua, is most destructive. The larval stages, particularly the third and fourth stages feed voraciously on the jute leaves and may skeletonize the jute plant. The jute semilooper, Anomis sabulifera is another serious pest. [SM Humayun Kabir]