Jute Carpet one of the three major items produced in jute mills of Bangladesh. The other two items are hessian and sacking. Production of carpet from jute increased in Bangladesh with a decline in the demand for sacking due to increased use of paper bags and bulk handling. In 1951, woven carpets and rug making activity in East Pakistan was pursued in 674 enterprises, of which only 3 were power driven, which implies that carpet making was basically a domain of cottage industries. The government established some jute mills in the 1950s and the mills bailed 130,000 m ton of jute in 1955-56. The output rose to 561,000 m ton in 1969-70. The industry suffered during the war of liberation and the production fell to 315,000 m ton in 1972-73. The production gradually increased after rehabilitation and rose to 577,458 m ton 1981-82.

Only a few jute mills converted sacking looms into carpet looms. By 1980, there were seven carpet mills with a total capacity of 65,100 m ton. Some new mills were established later and the volume of carpet production was 425,812 m ton in 1998.

Of the seven carpet mills established before 1980, two were owned by local private capital, three were in the public sector and two were set up with Iraqi credit. The government of Bangladesh undertook a Jute Sector Adjustment Reform Programme for assisting composite jute mills, which produced all major items including carpet. 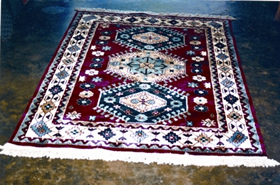 The programme initiated denationalisation of jute mills, but only a few could be handed over to the private sector until 2001.

During the Pakistan period, jute industry sold its products below the cost of production and it was granted subsidy through Export Bonus. Bonus vouchers were sold on the open market at premium price. Subsidy was granted on two considerations: employment creation and foreign exchange earnings. The bonus benefit received by the manufacturers of carpet for export in 1969-70 was Tk 1,345 per ton. In the 1970s, carpets constituted 11% of total sales of Bangladesh Jute Mills Corporation (BJMC).

Production of carpet and its sales in domestic market and abroad got some momentum towards the beginning of the 1980s and according to some estimates, carpet production was 53,458 m ton in 1985. Only 158 m ton of the production was sold in the domestic market and the rest went as export. The difference in domestic sale price and the export price was insignificant. The domestic sale price was Tk 23,171 per ton and the export price was Tk 23,874 per ton. In 1983, the mills under BJMC exported 71,841 tons of carpet and earned Tk 1.89 billion. But the jute carpet is losing gradually its market due to high price of it and unequal competition with the synthetic carpet. Presently the private jute mills do not produce the jute carpet by using the machine. So the rate of production under BJMC jute mills is decreased. In 2005, they produced only 20 m ton jute carpet.

Carpet making is a value addition industry. The material cost in producing carpet is about 44% of the total cost of production and the conversion cost is 38%. The cost structure suggests that raw jute accounts for 41%, other direct materials 2.7%, wastage 20.2%, salary 3.4%, repair and maintenance 6.6%, fuel and power 4.3% administrative expenses 5.2%, selling expenses 1.6%, other items 7.8%, and depreciation 7.2%. [M Habibullah]