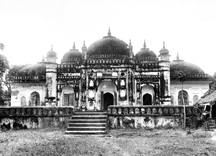 Kadam Mubarak Mosque is located at Jamalkhan ward of Chittagong City Corporation. The locality adjacent to this mosque is known as Kadam Mubarak, deriving the appellation from the two holy footprints on stone preserved in a room contiguous to the prayer chamber of the mosque. From an inscription it is known that Muhammad Yasin, a local faujdar, built this mosque in AH 1156 (AD 1723) during the reign of Mughal emperor Muhammad Shah.

The oblong mosque roofed over with three domes and two vaults is built on a raised platform marked with four standing octagonal three-tier towers at cardinal points, the apex of each being crowned with cupola and finial. The oblong prayer hall has one antechamber each on its northern and southern flank.

The prayer hall has a three-domed roof and the antechambers are covered with vaults. Externally, the mosque proper measures 13m by 7.42m. When the additional side rooms are taken into consideration, it is 23.16m in length. It had an open and wide courtyard at its eastern side.

Framed with ornate recesses and enclosed with two octagonal turrets, the fronton of this mosque is most elegant and attractive. The mosque proper has five doors, three on the facade wall and one each connecting the antechambers. The antechambers also have their own entrances and windows with a mihrab on the west wall. The interior walls of the mosque were lavishly embellished with rectangular panels and niches. The prayer chamber has three bays and a mihrab at the centre of the western wall. Kadam Mubarak Mosque is at present a modern mosque complex along with a residencial madrasa, a graveyard and a new mosque building etc. [Shamsul Hossain]