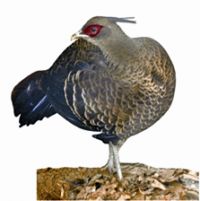 Kalij Pheasant (mothura) a ground-dwelling, swift running, endangered game bird, Lophura leucomelanos, also known as kalomayur. The bird belongs to the family Phasianidae, order Galliformes. A village hen-sized bird; its length is about 65 cm. The upper plumage is blue-black and rump is boldly barred with white, breast is black and glossed with steel blue and purple. Its feathers are rounded. Sexes are dimorphic. The female has the shorter tail and more upright crest.

Both sexes have backwardly directed long black crests. Wings are over 200 mm in length and rounded. The tail is slightly longer than the wing, compressed, and ‘roof-shaped’. The bird is active during mornings and evenings, but rests during mid-day. It is omnivorous. Breeding occurs during February to October. The pheasant nest is a shallow scrape made by leaves and rubbish. It lays 6-9 eggs. These are pale creamy in appearance and are incubated by the hen for 24-25 days.

The mothura lives in dense undergrowths in forests and in the neighbourhood of water and cultivation. They are found in the mixed evergreen forests of Sylhet and Chittagong areas of the country.

Hunting and habitat loss are the major threats to this bird. They are also found in India and Bhutan. [Md Anwarul Islam]