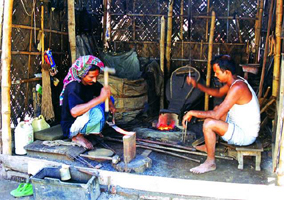 Kamar (Blacksmith) also known as karmakars, is an occupational caste associated with manufacturing iron implements at the cottage level. From very ancient times iron implements were made by village kamars who constituted a distinct occupational group within the shudra caste of Hindu society. Typically, in a rural market or in a village there was a kamar para where the iron artisans made their wares.

The smell of iron smelting in manually regulated foundry, the harsh sound of iron hitting on anvil sand, and the flares and sparks of the red iron on an anvil are characteristic features of a kamar para. Even now there are kamars in villages and in towns.

Their continued existence has a direct connection with the continuation of traditional agriculture, irrigation and housing patterns.

The origin of blacksmiths dates back to the beginning of settled agriculture in Bengal. As in other occupations, iron workers emerged as a caste group within the fold of the Sudra caste of the Hindu community. It is a popular belief that the first kamar was the son of a woman of the Sudra caste and his father was the celestial artificer Viswakarma.

The Statistical Account of Bengal enumerated four classes of kamars - Basundari, Rana, Gangaliri and Bahal, or Khota. Intermarriage was not permitted among these sub-groups. According to H H Risley, the kamars of Eastern Bengal were of three social types, Bushnapati, Dhakai, and Paschima, the first being again broken up into Naldipati, Chaudda-Samaj, and Pancha-Samaj, between whom intermarriage is permitted.

The majority of the kamars of Bangladesh are Vaishnavas, but a few follow Sakta rituals. Their favorite deity is Viswakarma, who is worshipped on the last day of Bhadra, with offerings of sweetmeats, parched rice (chira), fruits, molasses, flowers, sandal-wood paste, Ganges water, clothes, silver, ornaments, etc. At the same time, they worship the hammer, anvil, and other tools used in their trade. The women folk of the caste perform the Ananta, Sabitri, Shasthi, and Panchami bratas. Nistarini and Mangal Chandi are worshipped by women and children with offerings of sweetmeats, milk, fruit etc.

Unlike other sudra caste groups, kamars enjoy a better status in the sense that they are not untouchable in the estimation of orthodox Hindus. Kamars live in a specific location, in a village where they are able to carry out their activities. They have a cultural heritage that gives them the status of a community. They participate in rural fairs and festivals with their metallic products. Now many Muslims are seen to have taken to this trade and many kamars have adopted other occupations in both rural and urban areas. [Gofran Faroqi]