Katra possibly originated from the Arabic word katar or katara. Katara means a building having arches. In Arabic and Persian literature it has been called a 'Karwan Sarai' or simply a 'Sarai'. A Karwan Sarai would generally have a courtyard. An arched veranda would surround the courtyard and beyond the veranda would be the rooms where the passersby took shelter on their way from one place to another. The beasts of burden like horses and camels with carts and other articles necessary for a journey were kept in the courtyard. It is assumed that there were numbers of Sarais along the trade routes during the Muslim period.

In a Katra there was arrangement of sleeping rooms, kitchen, dining space, lavatories, mosque and even a hospital for the passersby. Waqf estates at private and public initiatives were created for the maintenance and smooth running of a saraikhana. Two Katras built at Dhaka by the Mughals deserve special mention- the Bara Katra and the Chhota Katra. These two are among the important architectures of the Mughals at Dhaka. 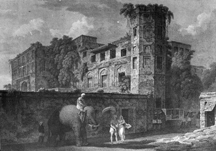 Bara Katra is situated to the south of the Chawk Bazar and is located just on the Buriganga. Originally, the Katra enclosed a quadrangular courtyard with 22 rooms on all of its four sides.

Two gateways were erected, one each on the north and south. The ruins consist of a complex having a river frontage. The southern wing of the structure was planned on a grand scale and was marked with an elaborate three-storeyed gate containing an octagonal central chamber. The remaining portion was two-storeyed and encased by projected octagonal towers.

The gateway structure is rectangular in plan. It is lofty in height and its fronton is projected towards the river. A tall alcove rising to the second storey reduces the mass of this projection. The wall surface is relieved with panels that are square as well as rectangular and that contain a variety of decorations of four-centred, cusped, horseshoe and flat arches. Above the apex of the alcove open the windows of the third storey. The three storyed corner towers are hollow and can be approached from the subsidiary structures. Following the traditional pattern of the caravan-sarai of Central Asia, the Bara Katra was highly fortified and was embellished with all the features of the imperial Mughal style.

The Bara Katra contains two inscriptions in Persian: one records that it was built in 1053 AH (1643-44 AD) and the other contains the date 1055 AH (1645-46 AD) and confirms that shah shuja gave the building to Mir Abul Qasim to be used as a Katra on the condition that the officials in charge of the endowments (waqf) should not take any rent from any deserving person alighting therein. Twenty-two shops were endowed as wakf to defray the expenses of the Bara Katra.

It should be noted here that more than half of the Katra building has already been destroyed and the building as a whole is in a dilapidated condition. It could not be taken over by the Department of Archaeology owing to the resistance of its owners. The owners have made several alterations to the original character of the building and have also started construction of a new multi-storeyed building in the area. Nevertheless, the surviving ruins stand as one of the most important monuments of Bengal. It is perhaps the most magnificent Mughal edifice of Bangladesh, which has a monumental central archway. 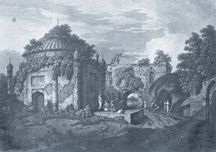 Chhota Katra is situated about 200 yards east of the Bara Katra at Hakim Habibur Rahman lane. Slightly smaller than the Bara Katra, it is similar in plan and was built almost for the same purpose. The Katra is rectangular in plan, 101.20m'92.05m externally and 81.07m'69.19m internally. The thickness of the outer walls is 0.91 to 1.00m and the maximum thickness of the bastion walls is 1.22m. There are two gateways, one on the north and the other on the south. The southern one is the main entrance. Both the gateways, though much altered recently, are still in situ. In the two outer corners of the south wall of the structure there are two octagonal towers.

The structures around the open courtyard have undergone much renovation, reconstruction and repair. Many modern extensions were also added to the original building. The three storeyed gateways on the river side has assumed some colonial features. The triple windows and the lofty angle towers reflect the colonial influence during subsequent restoration. The minarets were strongly built and were without parapets and, compared to other Mughal minarets, they were thicker. The floor and the fairly wide stairway were built of woods. The room in the ground floor was vertically divided in to two parts. The rooms are simple and without ornamentation.

The Chhota Katra is believed to have been built by shaista khan in about 1664 AD. It is also said that the Katra was constructed to accommodate some officials and also a part of Shaista Khan's expanding family. It is evident that the structure has lost much of its original look through indiscriminate alterations and unworthy restoration, though they have given it some durability.

Mukim Katra A portion of Mukim Katra falls within Maulvi Bazar and the rest is at Chawk Bazar. Mirza Mukim built the Katra in 1662 during the subahdari of mir jumla. It is not possible to trace the remains of this Katra.

Other Katras There is mention of some other Katras: Bakshi Bazar Katra, Mughaltuli Katra, Maya Katra, Nawab Katra, Nazir Katra, Rahmatganj Katra, Caravan Serai and Badamtali Katra etc. Badamtali Katra was adjacent to the Chawk Bazar. Dhaka Katras were smaller than those of northern India. There was a group of Katras at Karwanbazar. However, these are now non-extant. [Rasheda Waiz and Ayesha Begum]