Kazipara Mosque a Mughal mosque in Rangpur. It was built on a raised piece of land in the Kazipara muhallah of village Dharmadas, about a kilometre away from the Rangpur Cadet College and 3 km from Carmichael College. Severely damaged by the severe earthquake of 1897, its four walls have survived up to the roof level. Recently it has been partially repaired; the roof is now covered with corrugated iron sheets and a verandah has been added in the east. 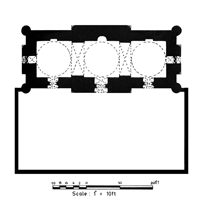 With the usual octagonal towers on the four exterior angles, there are three arched doorways in the east and a single arched window on the sidewalls. The corner towers, of which only the southwestern one now survives up to horizontal parapet level, extended far above the roof and were topped over with kiosks and cupolas. The central doorway, slightly bigger and projected outside, opens out under a high multi-cusped arch.

The western wall is internally recessed with a single semi-octagonal mihrab, which is in the axis of the central doorway. The mihrab is contained within a rectangular frame topped over by a frieze of blind merlons.

The three-domes, which once covered the three bays of the mosque, were carried on two east-west wide arches and the Bengali pendentives, for their traces are still noticeable on the upper part of the walls inside the building. The eastern facade retains the sunken rectangular panels and the surviving part of the parapet is faced with rows of blind merlons. The southwestern corner tower, which is now intact, is divided into sections by moulded bands. The spaces in between these bands are richly ornamented with terracotta plaques depicting varieties of motifs such as interlocking circles containing rosettes, network designs, floral scrolls and geometric patterns.

Two traditions, as to the date of this building, are current in the locality. The first one relates that the mosque was built during the time of akbar. But this seems to be untenable, for the Mughals during the reign of Akbar could not have brought this area under their control. The other legend ascribes the mosque to the time of aurangzeb. There may be some truth in this latter tradition. The surviving features of the mosque, specially its terracotta ornamentation has a closer affinity with those of some late 17th century Mughal buildings of Bengal. [MA Bari]