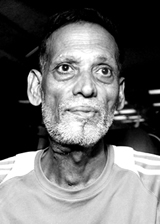 Khan, Azam (1950-2011) a popular folk singer, renowned as pop samrat (king of pop music) and a valiant freedom fighter. Azam Khan was born at Azimpur on 28 February, 1950. His full name is Muhammad Mahbubul Haq Khan. His father Aftabuddin Khan was a government official. His mother Jobeda Begum was a singer. He had great love for music since his childhood.

He continued his music venture due to the inspiration from his mother and amalgamation of delicate fortitude. He was the member of ‘Kranti group of singers’. He contributed to escalate the vigor of movement by performing mass-music concentrating on the issue of exploitation of West Pakistan over East Pakistan. He joined the liberation of movement and worked with the sector-2 headed by Sector Commander Colonel Khaled Musharraf. He participated in various guerilla operations in Dhaka. The most significant operation led by him was ‘Operation Titas’. After the war, he formed a pop music band called Uchcharan. He set off a unique implication with the harmonious mixture of western music with the content of local, which was illustrated as ‘Bengali Pop’.

His pop band earned instant reputation and Azam came to be known as pop samrat. His most popular pops included 'Eto Sundar Duniyai Kichhui Robenare' (nothing shall existed in this nice world)'; 'Char Kalema Saksi Debe' (four Kolema shall testify.); 'Ore Maleka, Ore Saleka' (O Maleka! O Saleka!); 'Rail Liner oi Bastite' (in that slum of rail line); Asi Asi Bale Tume Ar Elena (Didn't came assuring to be returned back); Alal O Dulal (O Alal, O Dulal); Harie Gechhe Khuje Pabena (lost, not to be found). In 1982 a cassette called Ek Jug (one decade) was released. He had 17 exclusive albums. Duet and mixed album are more than 25 to his credit. Besides, he played back for many cinemas. He also acted in Hiramon (1986) and Godfather (2003) cinemas.