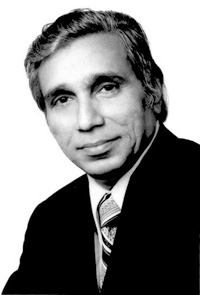 Khan, Fazlur Rahman1 (1929-1982) a visionary and one of the foremost structural engineers of the 20th century. Fazlur Rahman Khan ushered in a revolution during the second half of the twentieth century in the construction method of skyscrapers. Hailed from the village of Bhandarikandi in Shibchar upazila of Madaripur district.

FR Khan was born on 3 April 1929, in Dhaka. His father, Khan Bahadur Abdur Rahman Khan, was a renowned educationist and high government official in the education department. FR Khan passed the Matriculation Examination from Calcutta Bulleyganj Government High School in 1944 and was admitted to the Presidency College. He obtained the Engineering Degree securing first position in the First Class from Shibpur Engineering College of Calcutta in 1950.

He started his career as a teacher in Ahsanullah Engineering College, Dhaka. He was awarded a Fulbright Fellowship and a Ford Foundation Scholarship in 1952 to pursue higher studies in the University of Illinois at Urbana-Champaign in the US. He started his career in the US by joining the famed architectural organisation Skid Moore in 1955.

Fazlur Rahman Khan was a pragmatic visionary. The series of progressive ideas that he brought forth for efficient high-rise construction in the 1960s and ‘70s were validated in his own work, notably his efficient designs for Chicago’s 100-storey John Hancock Centre and 110-storey Sears Tower (the tallest building in the world for over 20 years). FR Khan epitomised both structural engineering achievement and creative collaborative effort between architect and engineer.

His ideas for sky-scraping towers offered more than economic construction and iconic architectural images; they gave people the opportunity to work and live 'in the sky'. Hancock Centre residents thrive on the wide expanse of sky and lake before them, the stunning quiet in the heart of the city, and the intimacy with nature at such heights: the rising sun, the moon and stars, the migrating flocks of birds. FR Khan was always clear about the purpose of architecture. His characteristic statement to an editor in 1971, having just been selected Construction's Man of the Year by Engineering News-Record, is commemorated in a plaque in Ontario Centre (446 E Ontario, Chicago): 'Innovation Follows Program'.

Despite apparent advantages, super-tall building construction faced a critical deterrent: expense. Skyscrapers were simply too costly by modern development standards. A tower reaching as high as the Empire State Building could not be justified in economic terms. It was a generally accepted 'fact' of construction that taller buildings cost more to build per square foot of rentable floor area than shorter buildings. It was at this critical moment in the development of the modern urban environment that FR Khan entered the profession.

Filled with both artistic ambition and optimism, and equipped with solid training in structural engineering, FR Khan was undeterred by the stodgy mind set and the technological difficulties that hindered tall building design. He recognised that the structural systems utilised for high-rise construction were not on a par with the modern scale of architecture, and he took on the challenge of advancing state-of-the-art structural engineering. A decade of revolutionary advances had just begun.

FR Khan's earliest contributions to the field- developing the shear wall frame interaction system, the framed-tube structure, and the tube-in-tube structure-led to significant improvement in structural efficiency: they made the construction of tall buildings economically viable. The framed-tube structure has its columns closely spaced around the perimeter of the building, rather than scattered throughout the footprint, while stiff spandrel beams connect these columns at every floor level. This structural system was first implemented in 1964 in the construction of the DeWitt-Chestnut Apartments in Chicago, a 43-storey reinforced concrete tower designed by FR Khan and his colleagues at Skidmore, Owings and Merrill (SOM). Because of its great relative strength and stiffness, the tubular form immediately became a standard method in high-rise design.

A few years later he introduced another groundbreaking structural system, the 'bundled tube'. This design for Chicago's 110-storey Sears Tower was structurally efficient and economic: at 1,454-feet, it provided more space and rose higher than the Empire State Building, yet cost much less per unit area. Equally important, the new structure type was innovative in its potential for versatile formulation of architectural space. Efficient towers no longer had to be box-like; the tube-units could take on various shapes and could be bundled together in different sorts of groupings.

When one looks at a text on tall-building design today, one finds these recognisable structure types: the framed tube, the shear wall frame interaction, the trussed tube, the bundled tube, and the composite system (also developed by FR Khan). Though Khan developed structural systems for particular project needs, he based his innovations on fundamental structural principles that allowed them wide application. His developments are among today's 'conventional' systems for skyscraper design.

As the building boom in the West came to an abrupt halt in 1974, new demands surfaced that thrust designers into unfamiliar settings. Clients in the Middle East and Asia, for example, were anxious and now financially able to construct housing, offices, and other facilities in large scale. SOM took on this design work, and FR Khan responded to needs and situations, as he perceived them.

For the immense roof of the Hajj Terminal of the new airport in Jeddah, Saudi Arabia - intended to shelter 80,000 pilgrims at a time, waiting for up to 36 hours - FR Khan searched for a coherent scheme that was both efficient and honoured the spirit of the Hajj pilgrimage. The fabric roof structure melds a traditional concept that of the Bedouin tent, with sophisticated technology. Twenty years after the airport's opening, this fabric roof and the space that it creates continue to awe as well as comfort terminal users.

In 1961, Fazlur Rahman Khan was made a Participating Associate in Skidmore, Owings and Merrill; in 1966 he became an Associate Partner and in 1970 a General Partner - the only engineer partner at the time.

In 1973 FR Khan was honoured with the top accolade for an engineer in the United States, election to the National Academy of Engineering.

FR Khan was cited five times among 'Men Who Served the Best Interests of the Construction Industry' by Engineering News-Record (for 1965, 1968, 1970, 1971, and 1979); and in 1972 he was named 'Construction's Man of the Year'. In 1983 the American Institute of Architects recognised FR Khan's contributions with an AIA Institute Honor for Distinguished Achievement. That same year he was honored with the Aga Khan Award for Architecture, 'for the Structure of the Hajj Terminal, An Outstanding Contribution to Architecture for Muslims', which was completed over the last years of his life.

Fazlur Rahman Khan was honoured posthumously by the Structural Engineers Association of Illinois with the John Parmer Award in 1987 and with the commissioning of a sculpture by the Spanish artist Carlos Marinas, which is located in the lobby of the Sears Tower.

He made laudable contributions in creating public opinion and amassing emergency fund for the misery stricken people of Bangladesh during its War of Liberation. He rendered his service as an advisor to the government of Bangladesh. Dr Fazlur Rahman Khan died from heart failure on 26 March 1982. The Government of Bangladesh posthumously awarded him Independence Day Medal 1999 in recognition of his contributions, and a commemorative postal stamp was published in his memory. [Rashimul Hoque]