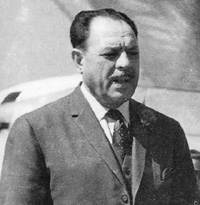 Khan, Field Marshal Mohammad Ayub (1908-1974) military ruler and President of Pakistan. Ayub Khan was born at Abottabad in the Northwest Frontier Province in 1908. He was educated at Aligarh Muslim University and at Royal Military College, Sandhurst, UK. He joined the army in 1928. He was promoted to the rank of Major General in December 1948 and was then appointed the General Officer Commanding (GOC) in the province of East Bengal. He discharged the responsibility of Defence Minister of Pakistan between 1954 and 1956.

In collusion with the then President Iskandar Mirza, army chief Ayub Khan imposed martial law in Pakistan on 7 October 1958, and abrogated the Constitution. Ayub Khan was appointed the Chief Martial Law Administrator by President Mirza on 8 October. But only after a few days, he ousted Iskandar Mirza from power (27 October) and declared himself the President of Pakistan.

Ayub Khan’s martial law regime was a form of representational dictatorship, and he introduced a new political system in 1959 as basic democracies. The Basic democracies system set up five tiers of institutions. The lowest tier was composed of union councils and the members were designated as basic democrats.

The urban areas had a similar arrangement, under which the smaller union councils were grouped together into municipal committees to perform similar duties. In 1960, the elected members of the union councils voted to confirm Ayub Khan's presidency, and under the 1962 Constitution they formed an electoral college to elect the President, the National Assembly, and the provincial assemblies. The system of Basic democracies did not have time to take root or to fulfil Ayub Khan's intentions before he and the system fell in 1969.

By 1958 Ayub Khan and his fellow officers decided to turn out the politicians, a task easily accomplished without bloodshed. He then took some fiscal measure especially in land holding. The landholding ceiling was raised from thirty-three hectares to forty-eight hectares. Landholders retained their dominant positions in the social hierarchy. Some 4 million hectares of land in West Pakistan, much of it in Sindh, was released for public acquisition between 1959 and 1969 and sold mainly to civil and military officers, thus creating a new class of farmers having medium-sized holdings. These farms became immensely important for future agricultural development, but the peasants were scarcely benefited.

In 1958, a legal commission was set up to suggest reforms of the family and marriage laws. Ayub Khan examined its report and in 1961 issued the Family Laws Ordinance. Among other things, it restricted polygamy and 'regulated' marriage and divorce, giving women more equal treatment under the law than they had before. It was a humane measure supported by women's organisations in Pakistan. However, this law which was similar to the one passed on family planning, was relatively mild and did not seriously transform the patriarchal pattern of society.

Ayub Khan adopted an energetic approach toward economic development that soon bore fruit in a rising rate of economic growth. Land reform, consolidation of holdings, and stern measures against hoarding were combined with rural credit programmes and work programmes, higher procurement prices, augmented allocations for agriculture, and, especially improved seeds to put the country on the road to self-sufficiency in food grains in the process described as the Green Revolution. The Export Bonus Vouchers Scheme (1959) and tax incentives stimulated new industrial entrepreneurs and exporters. Bonus vouchers facilitated access to foreign exchange for imports of industrial machinery and raw materials. Tax concessions were offered for investment in less-developed areas. These measures had important consequences in the development of industry and gave rise to a new class of small industrialists.

On 1 March 1962, Ayub Khan introduced a Constitution based on the presidential system and thereby became all-powerful in the country. In November 1964, election of basic democrats was held in both the wings of Pakistan. On 2 January 1965, election for the presidency of Pakistan was held through an indirect system of voting. The 80,000 basic democrats elected earlier had to act as the electoral college in this election. Ayub Khan was elected President by defeating the opposition candidate Fatema Jinnah.

Ayub Khan articulated his foreign policy on several occasions, particularly in his autobiography, Friends not Masters. His objectives were the security and development of Pakistan and the preservation of its ideology as he saw it. Toward these ends, he sought to improve or normalise relations with Pakistan's immediate and looming neighbours, India, China, and the Soviet Union. While retaining and renewing the alliance with the United States, Ayub Khan emphasised his preference for friendship, not subordination, and bargained hard for higher returns to Pakistan.

Other than ideology and Kashmir, the main source of friction between Pakistan and India was the distribution of the waters of the Indus River system. A compromise that appeared to meet the needs of both countries was reached during the 1950s; it was not until 1960 that a solution finally found favour with Ayub Khan and Jawaharlal Nehru. Broadly speaking, the agreement allocated use of the three western Indus rivers (the Indus itself and its tributaries, the Jhelum and the Chenab) to Pakistan, and the three eastern Indus tributaries (the Ravi, Beas, and Sutlej) to India. The agreement also detailed transitional arrangements, new irrigation and hydroelectric power works, and the waterlogging and salinity problems in Pakistan. The Indus Basin Development Fund was established and financed by the World Bank.

Pakistan's tentative approaches to China intensified in 1959 when China's occupation of Tibet and the flight of Dalai Lama to India ended five years of Chinese-Indian friendship. An entente between Pakistan and China evolved in inverse ratio to Sino-Indian hostility, which climaxed in a border war in 1962. This informal alliance became a keystone of Pakistan's foreign policy and grew to include a border agreement in March 1963, highway construction connecting the two countries at the Karakoram Pass, agreements on trade, and Chinese economic assistance and grants of military equipment, which was later thought to have included exchanges in nuclear technology. China's diplomatic support and transfer of military equipment was important to Pakistan during the 1965 Indo-Pakistan War over Kashmir. The Soviet Union strongly disapproved of Pakistan's alliance with the United States, but Moscow was interested in keeping doors open to both Pakistan and India. Ayub Khan was able to secure Soviet neutrality during the 1965 Indo-Pakistan war.

The 1965 war began as a series of border flare-ups along undemarcated territory at the Rann of Kutch in the southeast in April and soon after along the cease-fire line in Kashmir. The Rann of Kutch conflict was resolved by mutual consent and British sponsorship and arbitration, but the Kashmir conflict proved more dangerous and widespread. Each country had limited objectives, and neither was economically capable of sustaining a long war because military supplies were cut to both countries by the United States and Britain. On September 23, a cease-fire was arranged through the UN Security Council. In January 1966, Ayub Khan and India's prime minister, Lal Bahadur Shastri, signed the Tashkent Declaration which formally ended hostilities and called for a mutual withdrawal of forces.

When war broke out between Pakistan and India on 6 September 1965, Ayub Khan promoted himself to the rank of Field Marshal. Then in 1966, he chose the path of repression of his political opponents when the Six-point demand for autonomy of East Pakistan was raised by the awami league. The leaders of the Awami League including party chief Bangabandhu sheikh mujibur rahman were arrested. In the backdrop of an intense anti-Ayub movement during the period of 1966-68, Ayub Khan convened a round table conference of opposition political leaders at Rawalpindi on 26 February 1969. But when the conference failed to resolve the crisis, Ayub Khan handed over power to the army chief General aga mohammad yahya khan on 24 March 1969, and retired from politics. He died on 20 April 1974. [Helal Uddin Ahmed]