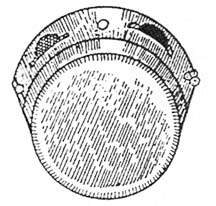 It is a drum-like instrument, usually made of neem or jackfruit wood, one side of which is covered with animal membrane, while the other side is left uncovered. A section of the wooden side is cut away, and a pair of metal discs set into it. When played, the metal discs make a clanking sound. Meanwhile the player strokes the membrane with his finger or strikes it with his hand.

The khavjari may be of different sizes. A large khanjari is known as daf or damf and is played with the dhol and other musical instruments during performances of kavigan, jari, sari, etc in rural Bangladesh and in some parts in India. The playing of this instrument during dance performances is mentioned in Mukundaram’s Chandimabgal. [Wakil Ahmed]