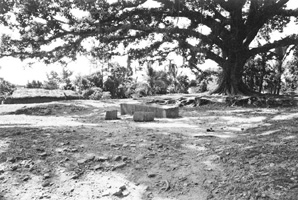 Khodar Pathar Bhita literally 'mound of the stone of God', in this case applied to a mound situated at mahasthangarh (Pundranagar) in Bogra district. The mound was given this curious name by local people because of the enormous granite stone doorsill (2.84m x 0.71m x 0.74m) found on its top.

The huge doorsill has two door-shutter socket holes, a recess on it's top, and floral decoration in relief. It was and is still worshipped by bare-footed local Hindus and Muslims. Excavations (in 1970) at the mound (46.94m x 40.84m x 02.44m) have revealed a temple and other small antiquities.

The temple is a rectangular Buddhist shrine facing east with stone pavement and foundation walls. The walls above the foundation level were of brick-in-clay masonry. The doorjambs, lintels, and ornamental portions above the door were probably built of stone.

One of the several carved stone pieces (69cm x 20cm x 18cm) exposed in excavations at this site, and now deposited with the varendra research museum of Rajshahi, shows three-seated Buddha images carved in relief in a line. The structural remains of the site are now under the earth, except for the huge doorsill. A large number of brickbats and stone pieces are scattered in and around the site. The remains of the mound have been dated to the early Pala period (c 8th century AD). [Ayub Khan]