Khwaja Shahbaz's Mosque and Tomb is located behind the Dhaka High Court, and to the east of the modern tomb complex of the three leaders (Teen Netar Mazar). Enclosed by a low outer wall with a gateway in the south the entire complex appears to have been built, as an inscription over the central doorway of the mosque records, in 1679 AD by Khwaja Shahbaz, merchant of Dhaka during the viceroyalty of prince muhammad azam.

The Mosque built on a raised plot of land, measures externally 20.73m by 7.92m. The four corner towers, which are octagonal to the height of the horizontal parapets and then rounded upwards, are topped by small ribbed cupolas having kalasa finials. The eastern facade has a projected fronton in the middle through which opens out the central doorway fitted with a stone arched frame. It is flanked on either side by a smaller archway. All the three eastern openings consist of two successive arches - the outer ones having cuspings in their faces are higher than the inner ones of plain four-centred type with an ogee curve at the apex. There are two more archways - one each on the north and south walls. The western wall is internally recessed with three semi-octagonal mihrabs, of which the central one, being traditionally bigger, shows an outward projection. Beside the central mihrab there is a three-stepped mimbar. Both the projections of the central archway and the central mihrab have flanking turrets, and these are carried beyond the parapets which have cupolas crowned with kalasa finials at the top. 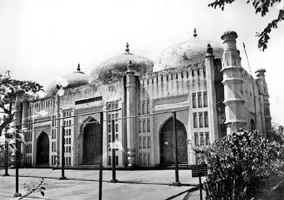 Two wide multi-cusped transverse arches, issuing from twin engaged brick pillars, divide the interior of the mosque into three equal bays, 5.18m square, each roofed over with a low shouldered dome on a cylindrical drum.

Crowned with lotus and kalasa finials, the domes are carried on two wide arches and blocked arches over the doorways and the mihrabs, and the phase of transition is achieved by means of half-domed squinches.

The flanking turrets have beautiful kalasa bases, the corner towers depict moulded bands at regular intervals and the parapet shows blind merlon decorations. Excepting the mihrabs and the archways, the entire plastered surface of the building is elegantly relieved with arched panels. The mihrab arches spring from beautifully tapering pilasters. The soffits of the mihrab arches are embellished with spearhead motifs, while their spandrels have floreate designs in stucco. The central dome has on the inside a basal frieze of projecting bricks set corner-wise topped by a twisted rope design, while at its apex there is a large medallion ornamented with a tiered rosette. The outer face of the stone-plinth and the topmost step of the mimbar have rows of floreate and blind cresting designs in shallow relief.

The Tomb stands to the northeast of the mosque. It consists of a square room and an attached verandah on the south. Strengthened with octagonal towers on the four exterior angles, the square apartment of the tomb is pierced with four axial doorways. All the doorways, excepting the southern one, are emphasised by projected frontons with fluted minarets on either side. The corner towers are extended beyond the horizontal parapets and topped by typical Mughal kiosks with kalasa finials.

The square tomb chamber, the centre of which is occupied by the cenotaph, is roofed over with a dome on an octagonal drum. Supported on four blocked arches on the four walls and squinches on the four upper angles the dome is crowned with a beautiful expanded lotus and kalasa final. The exterior faces including the octagonal towers of the building have been exquisitely decorated with panels, while the horizontal parapet is faced with a row of merlons.

The verandah on the south of the main tomb chamber is covered with a beautiful do-chala hut-shaped roof. It originally had three arched openings in the south and only one on each of the west and east walls. At present the southern side of the verandah is marked with a single wide opening. The arches of the verandah openings were cusped and issued from beautifully tapering pilasters.

Of the two extant monuments of Khwaja Shahbaz's building complex the mosque should specially be noted for the introduction of two uncommon features - the twin-pilasters for the support of the wide transverse arches and the beautiful spearhead ornamental motifs in the mihrab arches. The former must have been derived from the northern Indian Mughal examples, as in Shahjahan's Diwan-i-Am (1627) in the Agra Fort. The spearhead fringe motif also seems to have been a derivation from northern India, where it is very frequently noticed in the Sultanate monuments. [MA Bari]