Kumar (potter) also known in Bangla as kumbhakar, is a traditional occupational group engaged in clay modelling and making earthenwares and various household items and toys from clay. Kumar is a caste name, which indicates that pottery as a profession was almost exclusively in the hands of Hindus in the past. The innumerable domestic wares prepared by kumars include kalshi (household water vessel), handi (cooking pot), jala (big water jar), shara/dhakna (pot covers), shanki (dish), sharai (jug), plates, cups, badna (water pot) and dhupdani (vessel for scented sulphur). Clay made toys and clay fruits like palm, banana, jackfruit or mango, are popular sale items in traditional fairs and festivals. 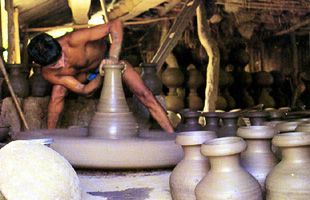 All kumars, whether of ancient or modern times, employ a simple technology in making the earthenware. The clay dug from the earth's surface is prepared by beating and kneading with the hands, feet or simple mallets of stone or wood.

The steps usually followed include: (1) clay collection and preservation, (2) preparing the clay for production, (3) modelling the shape and size of the wares, (4) drying the ware in the sun and finally, (5) firing and colouring it. In ancient pottery, the clay well tempered with water was invariably used without any additional material. Vessels were shaped by scooping out or cutting a solid lump or ball from this pure clay, by building up piece by piece, or by squeezing cakes of clay on to some natural object or a mould or form. The potter's wheel (chak) is a comparatively later invention. Kumars now use wheel with which they fashion various kinds of pottery, which then dried in the sun and later are heated in the kiln (panja). The wheel in its simplest form is a heavy disk pivoted in a central point to be set going by the hand of the workman squatting on the ground. After the processing in rotation is complete, the piece is removed from the wheel and set aside to dry. The neck and shoulders of all globular vessels are made with the wheel, but the body is fashioned by hand, often by women. A round ball of hardened clay (boila) is held inside, while with a wooden mallet (pitna) the material is beaten from the outside into requisite shape and thinness.

Kumars use two kinds of earth: bali (sandy soil) and kalamati (blackish sticky soil). The former is mixed with the latter in a proportion of 1:2 for production of strong pottery. The redden earth from Bhowal is used for making the common red earthenware vessels. The cheap red and black earthenware are both prepared with the same clay, the latter being blackened by covering up the kiln at a certain stage and by adding oil-cake to the fire. Many potters cannot glaze or fix the colours on the wares, but are content to paint the vessel after it has been baked. The colours are always made from different chemicals and metals such as copper, manganese, lead, arsenic etc. Red paint is prepared with red leads, yellow with arsenic, green by copper, blue from manganese, and black with the mixture of different chemicals.

Many kumars manufacture bricks and tiles, along with earthenware of all shapes and sizes, and idols and toys. The manufactories of kumars well repay a visit. Beneath the same thatched roof are the kiln, storehouse and dwelling house, while a free space in front of the door is used as a place to prepare the clay. The pottery made at Dhaka, Rajshahi, Chittagong, Comilla, Faridpur and Bogra is well known throughout the country for its fineness. In the rainy season boats laden with earthenware from these places travel to neighbouring districts through river ways.

The subdivisions within the kumar caste in Bengal include Bara Bhagiya, Chota Bhagiya, Rajmahalia and Khatya. Historically, Vaishnava has been the favourite deity of the caste. Their religious observances do not appear to differ materially from those of other Hindu castes of similar social standing. The social standing of the caste is respectable. They are recognised as members of the Navashaka group and brahmans would drink water from their hands. The profession of kumars runs through family lineage and both women and men work together.

Pottery points to the existence of clay work in the country. Earthenware and utensils found in different old terracotta point to the existence of superb quality pottery in olden times. Pottery adorned with artistic subtly and creative design has made their way into art exhibitions and museums. With the passage of time, the development of wares of other materials ie, plastic and metal wares brought changes in the usage of pottery. In the rural areas only the poor use rudimentary and cheap earthenware while wealthy members in urban areas use pottery as showpieces in drawing rooms or as items of interior decoration. [Gofran Faroqi]