Lahiri, Ramtanu (1813-1898) teacher, reformer and educational organiser. Born in a high kulin Brahmin family of Krishnanagar, Nadia, and educated at Hindu College, Ramtanu Lahiri was one of those educators and intellectuals who paved the way for various reform movements in Bengal in the 19th century. In many ways the 19th century may be called the age of school teachers. It was the school teachers, from henry derozio and david hare through Pundit iswar chandra vidyasagar, Peari Charan Sarkar and Pundit shibnath shastri who, in fact, created the awakening that Bengal witnessed in the 19th century. Ramtanu, as a teacher, was a typical representative of the era. 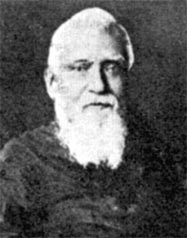 Lahiri Ramtanu’s father, Ramkrishna Lahiri, was a diwan of the Nadia Raj. Up to the age of eleven, Ramtanu attended the village pathshala. Then he came to Kolkata with his elder brother, Keshab Chandra Lahiri, and, through the patronage of David Hare, got a chance to study as a free student at Hare School. In 1828 he entered Hindu College on a scholarship. Here he came under the influence of Derozio, one of the most remarkable educators of the time. In 1833 Ramtanu became a teacher in Hindu College. In 1846 he moved to Krishnanagar College, a government institution founded that year.

During his long teaching career, Ramtanu taught in several institutions, finally retiring as headmaster of the Barisal Zila School in 1865.

Influenced by rammohun roy, Lahiri cast off his Brahmanical thread and became a Brahma. As a result, he was socially persecuted wherever he went. But educated people venerated him as a teacher and a model character. His disciples held him in high esteem. One of them, Pundit Shibnath Shastri, commemorated his guru by naming his famous social commentaries, Ramtanu Lahiri O Tatkalin Babga Samaj, 1904, after him.

Ramtanu made significant contributions to the expansion of Brahmoism . He influenced his students intellectually and morally, more by practice than by precept. As a government school teacher he was transferred from one school to another in Bengal. Everywhere he was received by his students and colleagues as a model teacher and as a source of new knowledge and ideas and as a unique organiser. By his learning, dedication and regenerative outlook and guidance, he created a generation of students who subsequently made themselves great leaders in the fields of education, politics, journalism and other professions. [Sirajul Islam]