Laksmi Pata (Bangla-Lok'khir pat, Lok'Khi Shara) is a traditional expression of Bengal folk art. Laksmi is the Hindu goddess of wealth, beauty, prosperity and fertility. Though she is worshipped in pious Hindu homes every Thursday, her annual worship is held on the full-moon night of autumn when the fields are full of dhan (paddy), the main harvest, and the moon is in the clear sky after the monsoons, representing completion of a circle. On this occasion, some Hindus worship the clay image, some a pitcher full of water with mango leaves in it and a green coconut representing a fertility cult. In some homes, especially in non-Brahmin ones, the Laksmi pata showing the icons is worshipped.

Laksmi pata originated in Bangladesh, but its  precise origin is unrecoverable. But the pata style, its iconography, the rituals - all reveal its folk and local origin and its deviation from mainstream classical Hindu belief. The invocations chanted are not from Sanskrit scriptures but from the Bengali folklore, known as panchali, they impart a moral lesson underscoring the victory of virtue over vice. 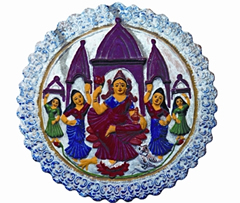 Alpana, using the forefinger of the right hand palm as a painting brush and rice-powder, diluted in water as a pigment and used as an associative embellishment, is drawn around the place of worship and along the way leading to it.

Laksmi saras (saucer) are of four broad types and have a number of variations. These four broad types are: (i) Dhakai - these originated in Dhaka; the rim of this type of saucers is slightly raised but the convex surface is not much raised. The surface is primed with white. Narayana and Laksmi are depicted in a standing position, facing each other. Their arms, holding stalks of corn, are raised from the elbow.

A kadamba tree bearing round yellow flowers stands in between with its branches spread over their heads like two arches. Laksmi seating on a lotus holding the stalk of corn and a treasure-trove, her carrier owl near her feet, is the subject of the single icon. The image of Laksmi riding a trade-boat alludes to Dhaka's history as a prosperous centre of trade. The round space is divided by a horizontal line into a large and a small semi-circular area. The main images are shown in the larger upper half, bearing an arch-type decorative design touching the rim. The raised rim is painted red symbolising prosperity. The lower half shows a smaller image of Laksmi with owl, or without owl, or only the owl. The background is left white. (ii) Faridpuri- Originated in Faridpur region, in this type of iconography, space division and the white priming in the background are same as in the Dhakai type, but the rim is not raised. The style too differs. (iii) Sureshwari- Originated in Sureshwar, village of Faridpur, in this type the round space is divided into five vertical panels; the central division, which adorns the main deity, is larger. A base line, drawn horizontally, creates a smaller lower semi circular space. The central vertical panel is further divided into two rectangles. The smaller upper compartment is for Siva -the male consort of Durga. The central compartment is ocupied by the main deity Durga, shown riding a lion and killing the demon Asura. Her children Laksmi and Ganesha adorn the two vertical compartments on her left side, while Saraswati and Kartikeya are on the right side compartments. The semi-circular space below the base line shows Laksmi. The architectonic space division is further enhanced by lotus-bud arches at the top, in the shape of a pancha-ratna or a Five-Jewel temple. The palette and the treatment of background are the same as in the Dhakai and Faridpuri types. (iv) Ganaki is a common type used by those belonging to the lowest rungs of Hindu society. In this type the background is solid red. The space is divided horizontally into a larger upper and a much smaller lower panel. The rim is painted black. The upper panel has an added semi-circular floral decorative band touching the rim. Durga is the main deity depicted and is shown with her full family. Laksmi is shown in the lower panel with her owl. The deities wear rich garment and jewellery. The finishing is profusely done with white lines, dots, and dabs.

Like all other folk styles, pata styles were handed down the generations. The clay-image makers paint the patas seasonally. In the first three types, colours are applied in free strokes area-wise to create a plastic feeling. A few sweeping strokes in black are used as finishing lines. In the Ganaki type, colours are filled in cautiously. They never overlap the contours. The finishing lines too never go astray. The styles have all the qualities of folk-art. The preference is for outline drawing and flat colours without tonality. Gestures are articulated to rhythmic expressions. The palette consists of red, yellow, blue, green, white and black - all in vibrant colours and having rich intensity. Laksmi pata or Lok'khir shara, executed as a commodity, sustains a community and embodies a living folk tradition. [Sovon Som]