Lattan Mosque is one of the best preserved monuments within the walled city of ancient gaur, now in Maldah, West Bengal. It is located between the tantipada mosque and the Bridge of Five Arches. The mosque has been stylistically dated to the end of the 15th or early 16th century and was possibly built during the time of the Husain Shahi sultans. 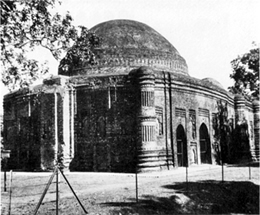 Built of brick, the entire building, consisting of a square prayer chamber of 10.36 m on each side and a verandah 10.36 m by 3.35 m forms a rectangle 21.95 m from east to west and 15.54 m from north to south. The prayer chamber is entered through three arched openings on each side except the qibla side. The qibla wall is internally recessed with three semi-circular mihrab niches facing cardinally the three entrances on the eastern side.

The oblong verandah is entered from the east by three arched doorways, and from the north and south sides by a single doorway. The central archway of the verandah, which is exactly in the alignment of the central doorway of the prayer chamber, is bigger than the remaining ones.

All the four corner towers, which have round flutings, are divided into sections by moulded bands and carried up to the roof level. The cornices and battlements of the building are beautifully curved.

The square prayer chamber is roofed over by a single dome. The dome is carried on a round base created by half-domed squinches on the upper angles and blocked arches on the four cardinal sides, all rising from engaged pillars - two on each wall. The spaces between the blocked arches and squinches are filled with brick pendentives. The oblong verandah is roofed over with three small vaults - the central one of chau-chala type and the side ones of the inverted cup-shaped type. The two wide transverse arches (which divide the verandah into three sections) in combination with small pendentives carry the thrust of these vaults.

The three doorways in the eastern facade are alternated with deep vertical panels - one above the other. Each of these panels contains a beautiful niche formed of a multi-cusped arch springing from decorated pillars. The outer base of the dome over the prayer chamber is marked with a row of blind merlons. The interior of the dome shows eight projecting ribs, each alternating with an elegantly designed hanging motif, and its apex is beautifully embossed with a full-blown lotus. The entire building, both inside and outside, was once embellished with multi-coloured glazed tiles of various patterns. Much of the ornamentation has already disappeared, but a few examples still exist in the mihrabs in a decaying state. [MA Bari]