Lukochuri Darwaza situated a little to the north of the gumti gate of the citadel of Gaur-Lakhnauti, is a Mughal building, ascribed to shah shuja, son of Emperor shahjahan, and governor of Bengal in the middle of the 17th century. The structure is in pure Mughal style. Although it has some similarity in plan with other gateways of the citadel, it is completely different in construction since it is to be entered by a iwan-type portal of four centred central arches flanked by similar arched doors on the sides. The gateway, made of brick, is rectangular in design, measuring 19.80m long and 12.90m broad. It is three storied in height and has flanking doorways in the first floor, similar to those below it, but with a flat roof above used as a naqqar khana that heralds the governor's entrance into and exit from the citadel. In the top storey, above the central arch occupying the space of the ground and first floors, are three large windows in the form of machicoulis above which are the crowning merlons typical of Mughal architecture. The entire structure is plaster-covered, and is designed in rectangular frames with muqarnas ornamentation of the Mughal type inside the hood of the central arch. 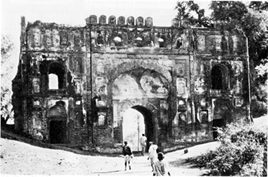 Since there was alreadya Szultanate gateway near it to the south, what was its necessityFoodgrain The answer is simple. A Mughal subahdar would not use a Sultanate structure as a ceremonial gateway for his entrance. The gateway was symbolic of Mughal rule and represented the spirit of independence and Mughalization.

From the time of the restored Iliyas Shahis, the city expanded towards the south. So its governor felt the necessity of erecting this gateway towards that direction. Moreover, it is known that Shah Shuja often visited his patron saint shah niamatullah Wali who resided in the southern part of the city in Firuzpur quarters. The erection would have shortened his journey and also given him an opportunity to pass through the city-centre, which was then towards the east and south side of the gateway.

The name Lukochuri (Bangla) is probably a later addition, and derives from its use by children who played hide and seek in it. [ABM Husain]