Manasa the goddess of snake and one of the most popular goddesses in Bengal. Manasa is the central character of Manasa mangalkavya, a versified version of famous legend composed in bangla language during the mediaeval age. Almost every ancient race has rich legends and tales. Most of those legends and tales are somehow connected with snake. There are recorded evidences of snake worship in ancient Mesopotamia, Egypt, Greece (Crit), Phenisia, Scandinavia and in other countries. A Sumerian sculpture of 3500-3000 BC presents figure of a pair of snake, twisting each other. The snake and eagle were the Royal emblem of the Pharaoh of Egypt. Moreover, their god of the earth had a snake-shaped head and he was the presiding deity of all snakes. The official seal used during the Harappa civilization had an image of a snake-human. The companions of the Greek hero Alexander during their expedition to India in 327 BC gave a vivid account of the ritual of snake worship prevailing in India. 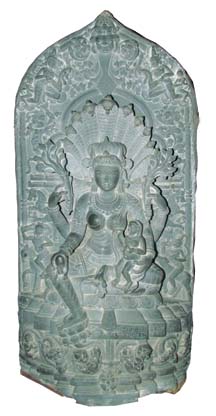 The goddess Manasa is worshipped by the Hindus irrespective of caste and creed in the months of Ashad and Shravan. During the rainy season when movement of snake increases, the devotees begin worship of Manasa seeking protection from snake bite. Moreover, the devotees also seek her blessings regarding the growth of wealth and welfare of children. Manasa is basically an earthly deity and even than people from all sects and caste of Hindu community respect her as a goddess for her unparallel popularity. There is no mention of goddess Manasa in the ancient puranas of the Hindus. The name of Manasa is found in the comparatively newer versions of Puranas like Brahmavaivarta Purana and Devi Bhagavata. But different legends about her glory, greatness and activities were highlighted and portrayed in the Bangla poetical work of mediaeval period, Manasamabgal.

The Puranas and the Manasamangal kavya presents two different versions about the origin of Devi Manasa. According to the Puranas, Manasa emerged as a goddess when Kashyapa Muni in meditation was composing a mantra (sacred hymn) for removal of snake venom at the instance of Brahma. As she emerged from the mind (manas) of Kashyapa Muni, she was named as Manasa. Later Manasa was married to Jaratkaru Muni. In Mahabharata, there are stories regarding the wedding of Kashyapa Muni with Kadru and their parenthood of thousand snakes, the wedding of Jaratkaru Rishi with Jaratkaru, sister of Vasuki, and the birth of their child Astika Muni who saved her mother's race from the snake killing mission of King Jonmejoy. But there is no mention of goddess Manasa in Mahabharata. However the story of Manasa was described in the Brahmavaivarta purana and Devibhagabatam in a modified way. Manasa replaced the existing wife of Jaratkaru Muni. Manasa attained a transcendental vision from the chief god Mahadeva after her meditation for thousand years on the Kailas. Later Kashyapa Muni bestowed her daughter Manasa as a bride to Jaratkaru Muni. One day while Jaratkaru Muni was sleeping Manasa awakened him at the dusk for offering prayer. The saint became so angry over the act that he decided to abandon his wife. On her appeal gods like Vishnu, Mahadeva and Kashyapa Muni appeared before Jaratkaru Muni and requested him to change his decision, but they failed to convince him. Then the gods ordered Jaratkaru Muni to have a son in the womb of Manasa. To obey the order of gods, Jaratkaru got fatherhood by mantra and Manasa gave birth to Astika Muni. Manasa was portrayed as a respectful character in Puranas for her kinship with two saints, Kashyapa and Jaratkaru Muni as her father and husband respectively.

According to the literacy portrayal of Manasa in Manasamangal, the story was developed on the conflict between Manasa and Chand Saodagar. Manasa wanted that her worship as a goddess should be introduced on Earth by Chand Saodagar. But Chand was her dead enemy as well as a worshipper of Shiva. He did not consider Manasa as a deity to be worshipped at all. Rather he tried to resist the introduction of the worship of Manasa. Without getting worship from Chand, Manasa killed his six sons and drowned his mercantile fleet in the sea successively. Although Chand's wife became a devotee of Manasa to save the life of their youngest son Lakhindar, Chand declined to bow down to Manasa. As a result, Manasa killed Lakhindar in the iron made bridal chamber by snake bite. His wife Behula reached the heaven with the corpse of her husband on a raft of banana tree to get back his life. She pleased gods there with her unique performance of dance as they promised to return the lives of all seven sons of Chand and his property if he introduce the worship of Manasa on Earth. After many conflicting events and climax Chand agreed to offer Manasa's worship as the goddess of snake. Manasa, according to Manasamangal was a daughter of Shiva. In some similar legends, Manasa's name is found as Siddhayogini.

There are difference of opinion regarding the origin of the name of Manasa. Some are of opinion that the name derived from a south Indian goddess 'Mane-manchamma'. In other opinion, 'Mudama' of Mysore region was transformed into 'Manasa' in Bengal. Variantly the name derived from the name of goddess Manasa of the Punjab, Hariana and Uttar Pradesh or god 'Manasa Deo' of Kol tribes in Madhya Pradesh. There is no existence of 'Mane-manchamma' goddess and even it has no image. According to her worshipers, 'Mane-manchamma', an invisible lady serpent, is worshipped as a snake goddess once in a year. But they do not make or use any idol for this propose. Half of 'Mudama's sculpture is like an woman and the rest is like a snake, and this goddess is worshipped by the lower caste people. The snake king Vasuki is more popular among the higher class devotees. Manasa of' the Punjab, Hariana and Uttar Pradesh was not a leading goddess and 'Manasa Deo' of Madhya Pradesh was also not a major figure. So there is no possibility of deriving the name Manasa from those minor gods and goddesses. Manasa is a local goddess of Bengal.

Manasa images made of stone, bronze and terracotta recovered from different places of the country have some common features. Most of the images bear two or four arms, the crown on the head designed with seven expanded snake hoods, Manasa was sitting in between husband Jaratkaru and brother King Vasuki with son Astika on the lap. On the right hand she is phal-anjalihasta, on the left she holds Astika or sometimes a snake. When she is four armed, she holds betel leaves on her upper hands and on the lower right she is phal-anjalihasta, some other types are also noticed. In a image of Varendra Reseach Museum, she is sitting in a yogic posture holding a rosary on the lower right, a snake on the upper right and a manuscript on the lower left and a ghat (bowl) on the upper left hand.

The image of Manasa found in Mangalkot in Bogra is regarded as the earliest one, has two arms. Most of the two-armed idols of Manasa hold the son Astika by one hand and a pot by the other. The heads of these idols are covered with crowns designed with expanded serpent hoods. Over 48 images of Manasa have so far been discovered from North Bengal. Some of them were built during the Gupta rule in the fifth or sixth century. Some archaeological sites in Bogra district are named after the characters mentioned in Manasamangal. These are Basar Ghar of Behula-Lakhindar (the bride chamber of Behula and Lakhindar), Netai Dhopanir Pat, Ojha Dhanwantorir Bhita, Chander Bari (the home of Chand), Chander Dhap, Godar Dhap etc. The names suggest that the Manasa cult was deep rooted and originated in North Bengal.

Most of the metal and stone images of Manasa found so far are believed to be made during the pre-Muslim period. After the advent of Muslims in Bengal changes took place in the form of Manasa image making the mythological era coming to an end and heralding the new era of mangalkavya. So human characters like Chand Saodagar, Lakhindar, Behula, Shulka replaced the puranic characters of Jaratkaru, Vasuki, Astika Muni etc in the story of Manasa. Like Brahma and Saraswati, Manasa possessed the same vehicle, goose. Idols of Manasa found so far have different features. In many places three hands of the 4-armed images hold snakes and the rest one holds a boon. In some cases, all the hands of the deity hold snakes. A form of eight serpent hoods are known as Ashtanaga Manasa. The deity is also worshipped as 'ghat' in some places. [Mokammal H Bhuiyan]