Mango a fruit widely cultivated in the tropical and subtropical countries of the world. The origin of mango, Mangifera indica, of the family Anacardiaceae, is lost in antiquity. According to some authorities, horticultural forms are derived from the species M. indica, considered indigenous to the eastern region of the Indian subcontinent, including Bangladesh, Assam (India), and Myanmar. The other species, such as M. laurina, probably originated in the Malayan region. Very few fruits are so inextricably connected with the folklore and religious ceremonies of India as the mango. 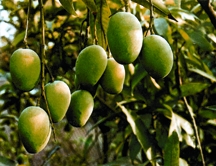 It is said that Buddha himself was presented with a mango grove, so that he could find repose in its graceful shade. The value and importance of the mango in ancient times is attested by one of its Sanskrit names, am, meaning stored food or provisions. The noted Chinese traveller Hwen T'sang, who visited India between 632 and 645 AD is credited to be the first person to bring the mango to the attention of the outside world. During his rule from 1556 to 1605, the Mughal Emperor akbar planted about 100,000 mango trees in an orchard near Darbhanga in Lakh Bagh, India. This is considered to be the first organised mango orchard of the subcontinent.

The name mango, by which the fruit is known in English and Spanish-speaking countries, is derived from the Tamil man-key or man-gay, which the Portuguese adopted as manga when they settled in western India. Introduction of the mango tree into the Western Hemisphere did not take place until about 1700, when it was planted in Brazil. From there it reached the West Indies around 1740. Some wild species grow in tropical America. Since a mango tree grows well in diverse agroclimatic conditions, it is now seen in many countries of the world.

The tree is evergreen and has a large, thick, and rough trunk; somewhat black bark, spreading branches; and a dense crown of foliage. When planted with wide spacing, the plant takes an umbrella-shaped top and may become more than 20 metre tall and 30 metre wide. The wood is grey, coarse-grained, rather light and soft in young trees, but hard in the old ones. They are found to remain crowded at about the end of a branch. The flowers, which are small, white yellowish, or violet, and fragrant, are borne in large terminal panicles. An inflorescence may contain 100-250 flower buds, not all of which may open.

The flowers may be unisexual or bisexual, and female flowers are rare. The extent of fruit setting depends on the proportion or number of complete flowers in a tree. Only about one or two flowers out of about one thousand may lead to a mature fruit. Two to three fruits in a panicle are often enough to give a satisfactory crop.

The fruit is smooth, a little compressed, fleshy, one seeded drupe. The form may be oval, round, heart-shaped, kidney-shaped, or long and slender, mesocarp fibrous or non-fibrous. Young fruits are usually green, and when ripe may turn greenish yellow, yellow, orange, red, often with various shades, or may even remain green. A mature fruit varies greatly in size and character. The smallest mangoes are no larger than plums, while others may weigh 750 g to 1 kg.

Mango trees grow widely throughout Bangladesh and are raised mostly as homestead plantations. Mangoes of this country belong mainly to two groups, such as, (i) superior or the elite varieties which are propagated through grafting and other vegetative means; and (ii) local varieties, raised by seedlings, popularly known as 'Deshhi' or 'Guti am'. The latter has no recognised varietal names, and the taste is not assured.

Propagation and cultivation There are nearly 100 cultivars of mango available in Bangladesh. Although there are numerous orchards scattered all over the greater Rajshahi and Dinajpur districts and other areas of the country, most of these are not well organised, old, and therefore, non-productive. The Department of Agricultural Extension of the Government of Bangladesh has arrangements for production and distribution of grafts of elite mango cultivars from their orchards, horticultural bases, and nurseries spread all over the country. Moreover, several orchards and research centres/stations including one each at Rajshahi, Nawabganj, and Joydebpur have been established by the Division of Horticulture, bangladesh agricultural research institute (BARI), to conduct research on propagation, production, post-harvest technologies etc.

Although mango plants are propagated or multiplied vegetatively, usually by grafting, to retain the characteristics of the mother plant, in rural areas these plants are still raised through seedlings from mango stones.

Almost any kind of soil is good for mango, except such soils which are less than one metre in depth and those with sub-soils having rocks or too sticky as clay. Some of the best mango orchards of Bangladesh are found in the gangetic flood plains in soils rich in alluvium loam, deep, and with a substratum of loose gravel. The optimum pH of soil for good growth ranges from 5.5 to 7.5. Mango flourishes well under conditions where there is enough rain to weight the soil up to a good depth, and a well-defined dry season with no rain at all. The setting of fruits is adversely affected by fog, rain, or cloudy weather in January-March when the trees flower. Mild showers at the time of development and enlargement of fruits are beneficial, but storms, particularly hailstorms, adversely affect them, often resulting in immature fruit drops.

When vegetatively propagated, mango trees begin to bear fruits for the first time in the fourth year of planting. Trees raised from seedlings take several years more to bear fruits. Once thus begin to have fruits, the number of fruits go on increasing year after year. Grafted trees remain in fruit bearing condition up to about the 45th year, after which there is a decline in fruit production. On the other hand, seedling trees tend to live longer and may bear fruits up to the age of 60 years or more.

Production Bangladesh produced about 6,39,820 m tons of mango during 2005-06 from an area of about 6,41,525 acres. The annual production, however, fluctuates, depending upon various factors. The present production is not very high compared to that of other mango growing countries. The factors that are considered responsible for low production include: (i) old trees which are no longer productive; (ii) a general lack of interest and attention amongst owners; (iii) lack of management and care of trees; (iv) absence of plant protection measures against insect pests and diseases; (v) growing trees from seedlings; (vi) apathy towards use of improved techniques of production; and (vii) indiscriminate felling of productive trees for fuel wood, road construction, house-building etc.

Uses The mango is one of the most delicious fruits of the world and is rightly designated as the 'king of fruits'. Different varieties however, have different tastes and flavours. The best consumption of mango is in the form of fresh fruit. The ripe fruit is peeled and the pulp is eaten as such, the fleshes either cut into pieces or made into small slices. Green fruits are often put into curries or 'dal' (pulse soup) for extra taste.

A considerable quantity of both ripe and green fruits are used for making jam, jelly, squash, chutney, pickle (achar), and similar other products. [SM Humayun Kabir]