Mental Hospital (manosic haspatal) an establishment or institution that provides medical and surgical treatment and nursing care for mentally retarded, sick or injured persons. Mental health service in Bangladesh is poorly developed compared to the developed and most of the developing countries of the world. Pabna Mental Hospital is the first and the only mental hospital in Bangladesh for a population of about 130 million. It was established in 1957 by the then Civil Surgeon of Pabna District in a local landlord's house. In 1959 it was shifted to Hemayetpur, about 8 km from the district town, in an area of 111.25 acres of land. Initially the number of beds was 60 and subsequently was increased to 200. Later in 1966 another 200 beds were added. Out of the total beds, 280 are non-paying and 120 are paying beds. There are 18 wards in the hospital- 13 (11 non-paying and 2 paying) for male patients and 5 (4 non-paying and 1 paying) for female patients. Currently efforts are being made to add another 100 beds.

The Director is the administrative head of the hospital. It has 365 sanctioned posts, including 24 psychiatrists, doctors, clinical psychologists, biochemists, psychiatric social workers etc, the remaining are supporting staffs that include nurses, pharmacist, radiographer, technicians, occupational therapists, administrative assistants etc. 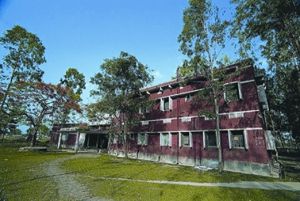 There is no rehabilitation centre in Bangladesh for the mental patients. Pabna Mental Hospital has a government registered Welfare Society. This Society provides fund for sending patients home after their recovery and supplies essential life saving drugs. Besides, the Society provides jobs to the capable patients during their stay in the hospital. The Directorate of Society Welfare of the Government of Bangladesh gives an annual grant to the Society. It also runs a number of projects such as, dairy and agricultural farms. Income generated from them is used for the welfare of the patients. The Society also receives donations from NGOs and private individuals and firms.

According to the WHO's global estimate of mental patients, Bangladesh with a population of about 130 million in 1998 had about 1.2 million severe mental patients and about 12.0 million mild mental patients. Recently, the National Mental Health Institute has been established in Dhaka that started functioning in 2000. All the Government Medical College Hospitals and the Combined Military Hospitals (CMH), and few private clinics have psychiatric wards. Narayanganj General Hospital and few private clinics have also wards for mental patients. In 1999 a 50 beds Mental Health Hospital with outdoor facilities was established in Sylhet under private management. The number of beds may be increased to 100 with added facilities in future. It has started treating outdoor patients with nominal charges.

One bed for two hundred thousand patients in Bangladesh is too meagre compared to any developing country in the world including the neighbouring countries. Considering the present inadequate facilities for treatment of mental patients, the government had decided to establish separate wards for them in all newly establishment Medical College Hospitals. [Roquia Begum]