Muchis (cobblers) are traditional shoemakers, shoe shiners, and skin tanners. In the Hindu caste hierarchy muchis occupy the lowest ranks and are regarded as untouchables. Even they live in an isolated separate quarters in the city or village. Their abode is generally called Muchipada.

Muchis, often called rishis, were extensively engaged in shoe making, repairing and shoe shining in the past. But now modern manufacturing units make shoes and shoe shining is no more a profession of any specialised caste. At present, a shoe shiner in a street or bazaar corner is often a boy coming from an agricultural or labouring background. 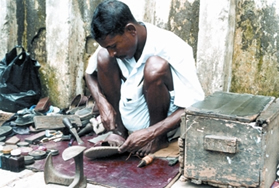 A muchi at work

The closest caste group of the muchis is the chamars who are considered to be below them in caste hierarchy. Muchis have two major sections: Kasyapa and Sandelya. Marriage between near relatives is not prohibited. Infant marriage also takes place too often.

Divorce is permitted on the ground of adultery and the divorced and widowed women can remarry. The majority of muchis are believed to belong to the Saiva sect, though quite a large proportion of them are Vaishnavas. They imitate the shudras in the most of their religious ceremonies. Muchis are known as hard drinkers of spirit, which they often manufacture at home. They also smoke ganja for intoxicatio.

Old terracotta remains indicate that higher-class people in the society in the ancient and medieval period used to wear shoes and sandals of various types and shapes. The word muchi is also found in old Bangla literature. These are indications of the existence of muchis from the ancient times. However, how this occupational caste emerged in the social structure is not certain. Under changed circumstances, traditional muchis are now transforming into new social groups pursuing new occupations such as bamboo and cane manufactures, cleaning, clearing, driving and so on. [Gofran Faroqi]