Formation of the government On 10 April a government was formed consisting of the top ranking leaders of awami league. The oath taking ceremony of the government took place on 17 April at Baidyanathtala, in the district of Meherpur. The oath taking ceremony was conducted by Abdul Mannan MNA and the proclamation of independence was read out by Professor mohammad yusuf ali. In this place a guard of honour was given to syed nazrul islam, the Acting President of the newly formed government. 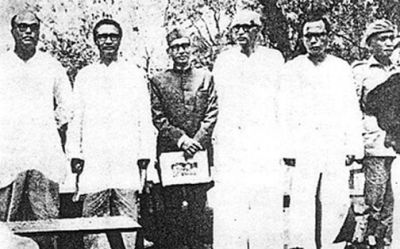 Ministry of Defence Staff MAG Osmany, Commander-in-Chief; SA Samad, Defence Secretary; Colonel Abdur Rab, Chief of Staff. The Ministry of Defence divided the war zone into eleven sectors and appointed a sector commander for each of the sectors. But there was no sector commander for sector No 10 or naval sector. Commandos used to fight under the command of the concerned sector commander whenever and wherever they carried out the operation in a particular sector. Besides, there were three brigades called Z force, K force and S force. Major Ziaur Rahman, Major Khaled Mosharraf and Major Km Shafiullah were the commanders of the brigades respectively.

Ministry of Foreign Affairs sought to obtain support of the foreign governments and people at large for the cause of liberation of Bangladesh by establishing Bangladesh mission abroad and by sending diplomatic emissaries to various countries. With this end in view diplomatic missions were established in Kolkata, Delhi, London, Washington, New York, and Stockholm. Diplomatic delegations were sent to the UNO, Afghanistan, Syria, Lebanon, Nepal, Srilanka, Burma, Thailand and Japan for gaining their support to the liberation war.

Ministry of Finance, Industry and Commerce was headed by M Mansur Ali and Khondaker Asaduzzaman was its secretary.

Cabinet Secretariat placed various proposals about the operation of the liberation war to the cabinet meeting, implementation of' the decisions of the meeting, and monitoring and recording these decisions. HT Imam was the secretary of the ministry.

General Administration Division was formed under the Ministry of Establishment to deal with appointment, transfer, promotion and framing of service rules. Nurul Qader was the secretary of the Establishment Division.

Ministry of Health and Welfare worked under a Director General. Later the position of the Director General was elevated to the status of a secretary. The functions of the health department was divided into two sectors: a) to impart medical treatment to the freedom fighters under the army ie under the Ministry of Defence and b) to render medical treatment to such civilians or persons who did not participate in the liberation war directly with arms.

Ministry of Information and Broadcasting played important role to build up public opinion in favour of the liberation war. This ministry used to perform its functions through four divisions: a) Radio (swadhin bangla betar kendra), b) Films, c) Publications, d) Fine arts and design.

Ministry of Home was responsible for maintaining law and order in the liberated areas. This ministry selected the uniform, badge and monogram of the Bangladesh police force. Abdul Khaleque was made the first IG of the police and was later appointed as home secretary.

Relief and Rehabilitation Division was created under the supervision of the Ministry of Home and Ministry of' Relief with a view to rehabilitate the refugees taking shelter in India.

Parliamentary Affairs Division worked under the ministries of Foreign Affairs and Law and Parliamentary Affairs. The main task of this division was to solve various problems of the members of Provincial and National Assembly and to engage them in various activities.

Agriculture Division worked for finding ways and means for taking measures to overcome food crisis by increasing food production in the post-war Bangladesh, introducing scientific cultivation and providing loans to farmers under easy terms in view of the wartime losses. [Mohammad Faiquzzaman]