Mungbean (mung) a common pulse crop Vigna radiata of the family Fabaceae. There are two major types in mungbean: i) aureus, the yellow or golden gram (sonamung), which has paler foliage, and yellow seed.

Mungbean is thought to have originated in South and Southeast Asian regions. It is widely grown in India, Pakistan, Bangladesh, Myanmar, Thailand, the Philippines, China and Indonesia. It is also grown in parts of East and Central Africa, the West Indies, USA and Australia. 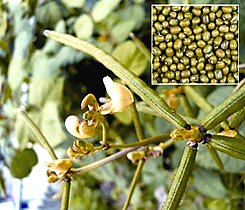 Mungbean can be cultivated on sandy loam, laterites, alluvial and heavy clay (black cotton) types of soils. The soil should be well drained since it is sensitive to waterlogging. Yields are best in deep, well drained alluvial loams, red loams and black soils.

In Bangladesh, mungbean is traditionally cultivated in the winter months, in about 54982 hectares of land and about 34,400 m tons of grains are produced. In Barisal and Patuakhali this crop is widely cultivated.

Diseases Mungbean is infected by a host of pathogens which include fungi, bacteria, viruses and mycoplasma. The majority of mungbean diseases are caused by fungi followed by viruses, bacteria and mycoplasma.

Mungbean seeds are used either whole or split into dal for several dishes. The seeds are used to prepare sweets and are also fried in oil to be eaten as snack. Young seedlings make nice vegetable. The green plant is used as fodder in many areas. It is also a good green manure crop. The dried stems and pod walls remaining after threshing are also used as cattle feed. [Md Imdadul Hoque and Nishit Kumar Paul]