Murshidabad Painting a new school of painting with traditional mughal qalam at its root developed in Murshidabad, the capital of the far-flung Mughal province of Bengal during the first quarter of the 18th century. This province was earlier a great centre of art and culture during the Pala and Husain Shahi period. The Mughals too patronized art and culture of the area.

Murshidabad School was established under the direct patronage of its governors when dispersed court artists of the crumbling Mughal Empire took refuge at the court of Murshidabad in search of their livelihood. During 18th century Murshidabad emerged into a new era of prosperity as a result of European trade and settled government. It is not certain whether any royal atelier of Murshidabad was formed under its first subahdar murshid quli khan (1716-1727). He was a pious ruler who despised all sorts of luxury.

Yet some paintings of his time - Murshid Quli Khan holding darbar by the Bhagirathi River (c 1720), Muharram processions, festivals on Khwaja Khizir - are preserved in a folio of Clive Album now housed in the India Office Library, London. The style of these paintings are local variations of regional Mughal albums. No extant examples of paintings under the aegis of the next subadhar shujauddin muhammad khan (1727-1739) have come down to us.

The real Murshidabad style of painting came into vogue under the next ruler alivardi khan (1740-1756). A contemporary historian Ghulam Hussein Salim is of opinion that Alivardi Khan was an avid patron of art and culture. Some of the paintings of his court, entitled ‘Nawab Alivardi Khan hunting Roe Buck’ (c 1750-1755), ‘Alivardi Khan seated on a Garden Terrace in conversation with his nephews’, are now preserved in the India Office Library. These are evidence of the early Murshidabad atelier and this aged ruler favoured darbar and hunting scenes, somber moods, chilly palette, dominant whites and grays in both hunting and court scenes

Under sirajuddaula, the grandson of Alivardi Khan, Murshidabad painting reached its highest apogee. His liberal views widened the horizon of Murshidabad court painting. Apart from formal court scenes and scenes of conversation his painters were encouraged to portray the cosy scenes of the zenana and also ragamala scenes. Thus a renewed vitality is noticed in the art activities of Siraj's brief reign. Like the pleasure loving later Mughal rulers scenes portraying women in romantic love scenes, as well as scenes portraying women in various activities in the zenana, and also women outside their precints were favoured by Sirajuddaula. Among the numerous raga and ragini scenes were depicted by the court artists. Among the ragas, hindola raga, gujari ragini, kakubha ragini, madhumadhavi ragini, bangali ragini etc are noteworthy. Lovers amidst a romantic landscape or on a royal terrace or on a river cruise are the most favourite scenes of this period.

Like their Mughal precursors, the Murshidabad artists painted on hand made papers in gouche. They worked on Mughal qalam. Themotifs of semi circular bushes bordering the terrace, the placid river with storks dotted on its banks overlooking the terrace; also far away vistas of undulating hillocks with schematically arranged semi-circular shrubs are indicators of Murshidabad provenance.

Under the next ruler mir jafar (1757-1760), Murshidabad atelier witnessed no remarkable change in the style of painting except losing vitality and charm of Siraj’s period. During this period Puran Nath, alias Hunhar, a renowned artist from Lucknow joined the Murshidabad atelier. 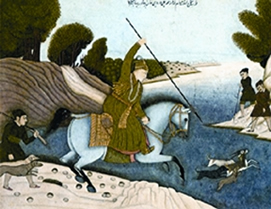 A beautiful painting by Puran Nath, now preserved in the Victoria and Albert Museum, London, depicts Nawab Mir Jafar and his son Miran inspecting armies amidst a vast field. Other miniatures representing single portrait of the nawab amidst barren natural settings, formal court scenes, etc recall the style of Alivardi Khan's atelier for their similarity of themes and choice of somber atmosphere and pallid colour scheme. The Lucknow painters who worked under Mir Jafar continued to work in the atelier of the next ruler mir qasim (1760-63).

Among them the most renowned painter was Dip Chand, from whose meticulous brush came the famous portrait of Gurgan, a courtier of Mir Qasim, which is now preserved in the Victoria and Albert Museum. Formal court scenes of the nawabs were also painted during this period, which are reminiscent of the paintings of his preceeding rulers.

By the time of Mir Qasim, the arrival and predominance of Lucknow artists brought in a remarkable change in the Murshidabad style, when the prevailing Mughal qalam was replaced by the Lucknow qalam. Portraits of nawabs and courtiers overwhelmed by exaggerated emotion, with fine stipplings of grey and brownish ground, the flower beds at the back drop of the portraits, yellow palette of the lily pond are indicators of Lucknow qalam.

The defeat and deposition of Mir Qasim by the English and the ascendancy of the aged puppet Nawab Mir Jafar for a second term to the masnad of Murshidabad, disturbed the congenial atmosphere needed for the promotion of art and culture. The patronage now passed on to the opulent zamindars, Muslim nobles, Hindu and Jaina businessmen and British officials residing near Murshidabad, who employed the disbursed artists to illustrate popular Hindu-Muslim manuscripts as well as muraqqas (picture albums) containing portraits of Mughal rulers, nawabs, courtiers, representation of ragamalas etc. Among those manuscripts and albums Dastur-i-Himayat, Razamnama, Nala Damayanti, Nabwa Daman, Ragamala, and Nayaka-Nayikabheda miniatures received the patrons favour. In the illustrations of Hindu gods and religious themes the artists represented local varieties of Hinduism in Bengal, such asVaishnavite and Tantric mode. While depicting those miniatures, the artists faithfully represented the flora and fauna of Bengal in a rather naive and folkish manner. However, the famine of 1769 dealt the final blow to the last vestiges of Murshidabad painting when the famine-striken poor artists took shelter at the Britsh master's atelier where they adapted themselves to the European influenced company style of painting. [Najma Khan Majlis]