Administration Nesarabad Thana was formed in 1906 and it was turned into an upazila in 1983. Swarupkati Upazila was renamed as Nesarabad Upazila in 1985. 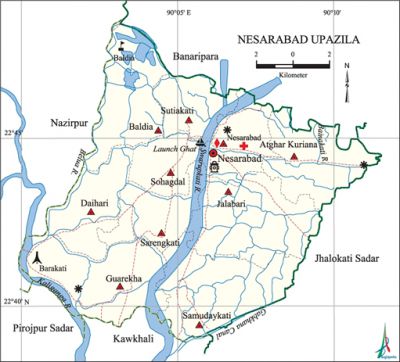 History of the War of Liberation The Pak army launched attack on Nesarabad upazila on 11 May 1971 for the first time. During the month of May and June the Pak army in collaboration with the local razakars conducted heavy plundering in different villages including Miar Hat and Inder Hat ports; they also set many houses and shops of these areas on fire. Besides, they also killed about 100 persons. The Pak army killed 7 persons of the same family at village Barajkati under Sohagdal union. On 10 November the Pak army and their local collaborators tied 18 innocent persons together with rope and tortured them to death in front of Barajkati Kachhari. During the war of liberation the Pak army in collaboration with their local agents killed about one thousand people of the upazila. They conducted the most brutal killing at Peara Bagan (guava garden) of Atghar Kuriana. After the end of the War of Liberation about 300 human skulls were collected from a ditch located behind the Kuriana College compound.

Natural disasters The earthquake of 1762 heavily changed the geological formation of the upazila and silted many water bodies. Besides, many people were victims of the flood of 1787, and the cyclones and tidal bores of 1822, 1825, 1832, 1855 and 1909; these natural disasters also caused heavy damages to settlements and other properties of the upazila.