Pantomime a kind of solo performance in which the performer conveys the story through gestures, facial expressions and body language without any dialogue. It is now recognised as an independent performing art.

The origin of pantomime may be traced back to ancient Greece and Rome where it was a solo performance. Pantomime developed in England in the 18th century, but was often a ballet with several performers rather than a one-person show. The French pantomimist, Marcel Marceau, turned the pantomime back to what it originally was; a one-man show, with the pantomimist playing several roles.While pantomimes used to be performed sporadically at village fairs, the pantomime as a performing art form in Bangladesh emerged only in the early seventies. Partha Pratim Majumdar and Mashrul Huda are pioneers for popularising the pantomime in Bangladesh. 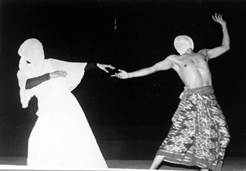 Two stages in the development of the pantomime may be distinguished: the first stage lasting from 1975-88 and the second one beginning from 1989. The possibilities of the pantomime as a new medium for the stage were first demonstrated in Bangladesh by the performance of the American pantomimist, Adam Darius, at the Engineers' Institute in 1975. Subsequently, a number of pantomimes were staged. Most of these performances were for television audiences.

The early pantomime would be in the form of 5-6 sketches, performed by a lone performer, and lasting for a few minutes. The pantomimist would wear black tights and his face would be painted white. The subject matter was usually slight and mainly of entertaining nature. Quite a few good pantomimes were performed: Janma Theke Mrtyu (From Birth to Death), Balak O Pakhi ((The Boy and the Bird), Prajapati (Butterfly), Photographer, Ausadh Bikreta (The Medicine Seller), Bakhate Chheler Parinati (The End of a Young Scoundrel), Rickshawala (The Rickshaw Puller), Machh Dhara (Fishing), etc. Though generally entertaining, some of these pantomimes touched upon serious subjects.

Since 1989, the pantomime has no longer remained limited to a solo performance. The Dhaka Pantomime, founded on 23 October 1989, has contributed a great deal in popularising this style of pantomime in which several performers take part. The group has staged pantomimes with solo performers as well as pantomimes with several performers playing different roles. There have been changes in make-up, dress, lighting, music, etc. Innovations have also been made in the use of masks. The pantomime has increased in length. Instead of several short sketches, one particular event or theme of thirty to fifty minutes' duration has become popular.

Since 1990 both the pantomime sketch and the 'mimodrama' are being performed. The pantomime has become more serious in theme with a consequent effect upon modes of expression and gestures.

The pantomimes of Dhaka Pantomime have been staged at bangladesh shilpakala academy, Mahila Samiti, Guide House, British Council, German Cultural Centre and the shaheed minar. Some of their famous pantomimes include Manav Sabhyata (Human Civilisation), Manav O Prakrti (Man and Nature), Bhasa Andolan (Language Movement), Svadhinata (Freedom), Nadi Pader Jiban (Life on the Riverbank), Madakasakti (Drug Addiction), Ar Nay Hiroshima (No More Hiroshimas), Svadhinata Sangram (Freedom Struggle), Jiban-Yuddha O Shanti (Life-Struggle and Peace), Jiban Sangrame Naitikata (Morality in the Struggle of Life), Nari Niryatan (Repression of Women), and Duhsvapna (Nightmare). These pantomimes were group performances rather than solo ones. They were also of fairly long pieces, rather than brief sketches. The titles of the performances suggest the profundity of the themes. Pantomime was no longer relegated to mere entertainment but could deal with serious subjects such as the struggle to survive.

A workshop arranged at the Bangladesh Shilpakala Academy produced some remarkable performances such as Sonar Kathi Rupar Kathi (Golden Stick and Silver Stick), Ali Baba O Chalish Chor (Ali Baba and the Forty Thieves), Sat Bhai Champa (Seven Brothers and Champa). The first Pantomime Festival was jointly organised by the Bangladesh Shilpakala Academy and Dhaka Pantomime in October 1991. Two foreign groups participated in the festival, which included the first seminar on pantomime. It may be noted that Partha Pratim Majumdar, who was the pioneer of pantomime in Bangladesh is now a world famed pantomimist based in Paris. [Zillur Rahman John]