Patgram Upazila (lalmonirhat district) area 261.51 sq km, located in between 26°17' and 26°33' north latitudes and in between 89°03' and 89°21' east longitudes. It is bounded by west bengal state of India on the north, east and west, hatibandha upazila and West Bengal state of India on the south. This upazila has 27 enclaves of which Dahagram and Angarpota are the most noted enclaves of the country. The Tin Bigha Corridor connects these two enclaves with the main land.

Administration Patgram Thana was formed in 1801 and it was turned into an upazila on 18 March 1984. 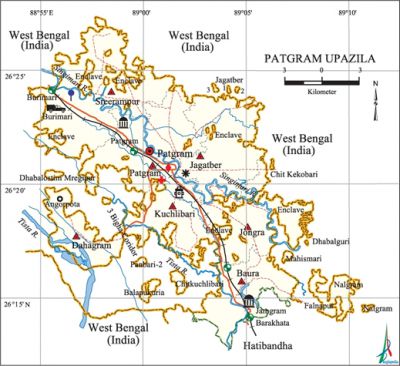 History of the War of Liberation Burimari of Sreerampur union under Patgram upazila was under Sector 6 during the war of liberation and sector commandar was Wing Commandar MK Bashar.

Marks of the War of Liberation Martyr Afzal Auditorium.

Natural resources High quality sand and stone-chip have been discovered in this upazila.