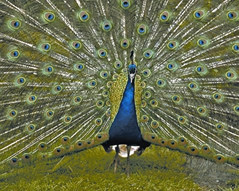 The male peacock has a crest and whitish bare areas on the sides of the head; the plumage is brilliant metallic green and blue. The upper tail coverts are enormously elongated, forming the train of more than a metre in length, bronzy-green and blue in colour, and ornamented with brilliantly coloured eyespots or ocelli. A white variety is common in captivity. In courtship display, the train is erected vertically above the bird's back, being supported by the tail feathers. At the climax of the display the tail feathers are vibrated, giving the feathers of the train a shimmering appearance and imparting a rustling sound. 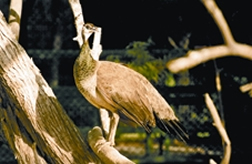