Planning Commission The Bangladesh Planning Commission is the central planning organization of the country. It determines objectives, goals and strategies of medium and short-term plans within the framework of long-term perspective, and formulates policy measures for the achievement of planned goals and targets.

• to make recommendation as well as being involved in the process of deliberation on a range of policies and institutional changes which were necessary for the implementation and realisation of the Plan objectives; and

• to co-ordinate the economic policies, both short and long-term, to be under taken by the various ministries.

In addition, the Planning Commission was to serve as the secretariat for major economic policy questions and for initiating the appraisal of development projects and programmes by the National Economic Council (NEC). The NEC was created to serve as the economic mini-cabinet consisting of the main economic ministers of the cabinet and headed by the Prime Minister. The terms of reference of the executive committee of National Economic Council (ECNEC) are as follows: (a) to consider and approve development projects; (b) to review the progress of implementation of projects; and (c) to monitor the overall performance of the economy and related policy issues.

Activities of the Planning Commission includes the following elements of development planning:

• Sectoral Planning: identification of the role that the various sectors of the economy are required to play in the context of the Plan objectives and goals;

• Project Planning: appraisal of projects embodying investment decisions for the implementation of the sectoral plans; and

• Evaluation: impact analysis of projects, programmes and plans on the people’s living standard.

Functions of the Bangladesh Planning Commission in more concrete terms are:

• Formulation of the Three Year Rolling Investment Programme (TYRIP) in consistence with the Five Year Plan.

• Preparation of Annual Development Programme (ADP) within the framework of TYRIP and Five Year Plan.

• Appraisal of project proposals for the ECNEC and the Minister for Planning.

• Evaluation of Plans and their impact on the economic development.

• Undertaking and promotion of research to support development planning.

The Commission formulates five-year economic plans. However, planned development of the country can be traced in two phases, phase one: between 1947 and 1970 during Pakistan period, and phase two: the Bangladesh period. In the first phase there were three five-year plans including a six-year development plan from 1951 to 1970. In the second phase it took sometime to consolidate the administrative structure and reconstruction of infrastructure of the war-ravaged country and gather information for preparation of development plan. The First Five-Year plan of Bangladesh covered the period 1973-78. Then, instead of launching the Second Five Year Plan, a Two Year Plan for the period 1978-80 was taken up. The Second Five-Year, Third Five-Year and Fourth Five-Year plans were launched during 1980-95. The Fifth Five-Year Plan (1997-2002) started after a gap of two years. Government undertook preparation of Poverty Reduction Strategy Plan (both interim PRSP and full PRSP) following Fifth Five year Plan during 2003-2011.

The Planning Commission is essentially a professional body. But since planning is a political process it works under the guidance of a minister. But ultimate decision-making rests with the head of the government ie the prime minister who is the chairperson of the Commission. The Minister for Planning is the vice-chairman of the Commission. At the policy level, the Commission consists of vice chairman and five members. Secretary Planning Division acts as the member-secretary of the Commission. The Planning Division provides the administrative and secretarial support to the Planning Commission. Under the members there are six divisions which are further sub-divided into thirty functional wings. Two of the divisions deal with the general macro issues of the economy viz. General Economics Division and Programming Division. Four sectoral divisions are Agricultural, Water Resources and Rural Institutions Division; Industry and Energy Division; Socio-Economic Infrastructure Division and Physical Infrastructure Division. These divisions deal with the planning and policy issues of different sectors of the economy. 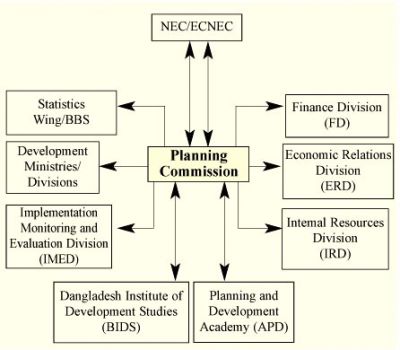 In preparing Five Year Plan, The Annual Development Programme and in carrying out the process of project appraisal and approval, the Planning Commission interacts with different ministries / divisions/ agencies of the Government.