Pomfret (chandamachh) any of the members of the fish family Stromateidae, order Perciformes popularly known as Chanda fish. These fishes have strongly compressed body and small mouth with or without teeth in the jaws. Scales usually very small, sometimes moderately large. Bones soft. Pomfrets or Chandas are quite tasteful and have a high demand in the market. The common species found in the bay of bengal are Rup Chanda, Pampus chinensis, Fali Chanda, P. argenteus, and Hail Chanda, Parastromateus niger.

The Rup Chanda or Chinese Pomfrets are found in the muddy bottom near the sea coasts where depth of water is about 100 m. Generally they move in groups. Sometimes the are found in the estuarine brackish water. They feed on soft, small invertebrates and may reach a maximum length of about 45 cm, the average being 22 cm. The average weight is about 500 g. Gillnets and trawlnets are effectively used to catch them. Dried Rup Chanda has a great demand in the market.

Fali Chanda or The Silver Pomfret is found in large numbers in the coastal waters of cox's bazar, Elephant Point, and Swatch of No Ground near Dubla Islands of the sundarbans. It is also caught in smaller quantities from the other parts of the lower estuaries. Gillnets and Trawlnets are effectively used to catch it. They attain about 30 cm, weighing about 500 g. 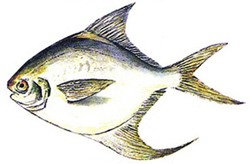 The Brown Pomfret or Hail Chanda is caught in commercial quantities from the lower estuaries and near by waters of the sea where the depth is around 100 m. Driftnets are used effectively to catch the fish. Trawlnets are also used. Their maximum length reaches to about 30 cm and weight about 500 g. The other Chanda fishes found in the Bay of Bengal are Makhan Chanda (Ariomma indica), Chan Chanda (Mene maculata) and Taka Chanda (Leiognathus species).

The pomfrets contribute a significant portion of the total fisheries resources collected from the waters of the Bay of Bengal. The present exploitation rate is about 0.40, which does not exceed the optimum exploitation (Emax) 0.6075; mostly found between 50 and 60 m depth contour. [Yusuf Sharif Ahmed Khan and Md Golam Mustafa]