Power Plants is an establishment for power generation. In Bangladesh, the consumption of per capita generation is very low only 220 kWh. Presently about 47% of the total population have access to electricity. Bangladesh Power Development Board' (BPDB) is the sole government authority for generation of electricity. Major power distribution agencies include the BPDB itself and the rural electrification board (REB). The Dhaka Electric Supply Authority (desa) and Dhaka Electric Supply Company (DESCO) for Dhaka or the Khulna Electric Supply Company (KESCO) for Khulna. The power division of the Ministry of Energy and Mineral Resources is the umbrella organisation that controls power generation, transmission and distribution. An Independent Power Project (IPP) of the ministry is under implementation for improvement in generation and distribution of electricity by government and private agencies. 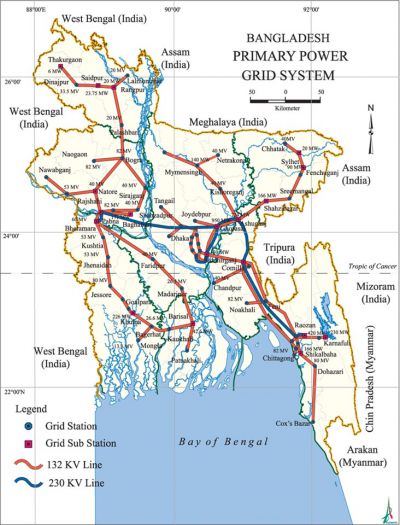 After the independence of Bangladesh had only 7 power stations with 11 units at Kaptai, Shahjibazar, Shiddhirganj, Khulna, Thakurgaon, Rajshahi and Bogra. Later on, the government installed different power plants in Ashuganj, Sylhet, Fenchuganj, Ghorasal, Haripur, Raozan, Baghabari, Bheramara, Saidpur, Barisal, Rangpur, Bhola, Chittagong and Sikalbaha. However, since 1990s the government encourages industries to install their own small electricity generating plants so that they can continue uninterrupted production during the load shedding. Private power companies are also allowed to produce and supply power to the national grid under agreed terms. Barge-mounted plants are the result of first such initiatives by the private sector. Among them the mentionable centres are Baghabari, Khulna, Mymensingh and Meghnaghat. In 2009, the installed capacity of the power plants in Bangladesh in Public and private sectors were 3824 MW and 2104 MW respectively. There are 18 and 25 power plants under public sector and private sector respectively. But during the peak hour, the total capacity of both public and private sector are 5376 MW of which 3331 MW and 2045 MW public and private sectors share respectively.

Types of Power Plant There are five kinds of power plant in Bangladesh. Such as: Steam Turbine Plants is mainly based on natural gas. Also in some cases coal and furnace oil are used as primary fuel in small amount. The largest steam turbine power plant based on natural gas is situated at Ghorasal, Narsingdi. There are six numbers of units (per units 55 and 210 MW) having capacity (55x2+210x4) 950 MW. Installation of 200-300 MW capacity duel fuel plants at the existing Ghorasal premises is under process.

Combined Cycle Gas Turbine Plant is situated in Fenchuganj, Baghabari and some other places in Bangladesh. The combined cycle Gas turbine of capacity 450 MW is running at Maghnaghat.

Hydro Power Plant the only hydro based plant in Bangladesh is located at Kaptai in Rangamati district. During 1962-1988, the plant generated gradually 230 MW power through initialisation five units. Planning of installation of another two hydro-based units at the same premises is also under process. However, The hydro potentiality for power Generation in Bangladesh is truly insignificant.

Wind Turbine Plant Following the crisis of primary fuel, emphasis has given on searching of alternative fuel for power generation. For diversification of fuel, the future plants to be run on coal, LNG, nuclear and renewable energy like solar, wind etc. The country's first wind base power plant has installed at Matamuhury under Feni district having capacity of each unit 225 kW. There are four numbers of units and 0.9 MW of power may be generated from the plants. Then at Kutubdia 50 wind turbine had been installed having capacities 20 kW each.

A deal has been signed with Russia for establishing a nuclear power plant of two units having capacity of each unit 1000 MW at Ruppur in Pabna district. It is assumed that the plant will be generated during the year of 2017-18. [AK Mahmud]