Protozoa a subkingdom of Protista, whose most common characteristic is that the individual unit is a single cell. The protozoan is differentiated from other protists by having an eukaryotic nucleus, a distinct cell structure, and a distinct mode of metabolic process, although in some cases the lines of demarcation are not clear. These unicellular organisms can perform all of the necessary functions for life, many of which in higher organisms are performed by special organs, or organ systems. The subkingdom is certainly polyphyletic. This has been proven by biochemical analyses, which demonstrate that certain phyla of Protozoa are more closely related to particular unicellular plants than to any other protozoan phyla. Historically, discovered by Van Leeuwenhoek in the late 17th century, mention of disease symptoms caused by protozoans can be found at least as far back as the Sung Dynasty in China. Currently known species number is about 40,000, although this seems to be a gross underestimation. 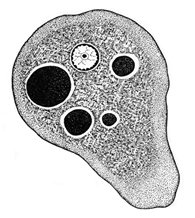 The number of phyla in the subkingdom is currently five. It had contained 8 phyla for many years. However, the flagellates and amoebas are now grouped under a single phylum, Sarcomastigophora. Also, the phyla Myxozoa and Ascetospora have been shown to be alternate cycles of a single phylum, the Myxozoa. This phylum, which has long been noted as possessing stages more consistent with multi-cellular organisms, has recently been removed from the Protozoa on the basis of biochemical analysis. At the same time a number of species that are difficult to place in any of the currently recognized phyla will probably give rise to new phyla in the future.

The currently recognized phyla are Sarcomastigophora, Labrinthomorpha, Apicomplexa, Microspora, and Ciliophora. The majority of the protozoans are free living organisms and play important roles in both terrestrial and aquatic ecology. [Glenn A Bristow]

Free living Free living protozoans may exist singly (Amoeba) or in colonies (Volvox). Both solitary and colonial species may be either free moving or sessile. A great majority of Protozoa are microscopic, some can be seen by naked eyes (Spirostomum of about 3 mm), while Nummulites, a fossil foraminiferan was as big as 19 cm.

Free living protozoans live in ponds, lakes, streams, soil, and similar habitats. They may be saprozoic, holozoic, holophytic, phototrophic or coprozoic depending on their nutrition and food habits. Mastigophora, Sarcodina, and Ciliata, are either free living or parasitic, but Sporozoa is entirely parasitic.

Many free living flagellates are considered as members of plant kingdom by the botanists. In marine forms, dinoflagellates are epipelagic (200 meter depth), foraminiferans and other rhizopods are mostly littoral benthonic types. The freshwater type is least abundant in lotic (running water) and most abundant in lentic (standing-water) habitats. Flagellate organisms are important as primary producers of organic matter in aquatic habitats. Many protozoans feed on bacteria and so channel back some of energy content of the decomposer group into higher trophic levels of the food chains. Protozoans that consume bacteria are of particular importance for soil and polluted waters. Free living protozoans are useful in sewage processing, sanitation, 'Oceanic ooze' (containing Silica and Calcium Carbonate) giving building materials like chalk and lime stone; 'Radiolarian ooze' gives clue for possible petroleum drilling strata. Soil protozoans (Ciliates, Amoeba) by consuming beneficial bacteria may detriment the soil fertility. Ammonification and N2- fixation proceed rapidly by some soil protozoa.

Very little is known about the free living Protozoa of Bangladesh. The marine fauna of this group from Bangladesh coast include the members of Tintinnidiidae family, Flavella taraikensis and Helicostomella sp. Fresh water protozoans Pleodorina, Protococcus, Phacus, Euglena, Trachelomonas, etc. of different orders have been recorded.

Parasitic While most are free living, a number from all phyla are parasitic and several of them are among the major disease causing organisms in humans and their domestic animals. In the subphylum Mastigophora of the phylum Sarcomastigophora are found the Trypanosoma, which cause such diseases as Chagas disease and sleeping sickness, while the Leishmania are the causative agents of Kala-azar and related diseases. The diplomonad, Giardia lamblia, while less often causing mortality, is a ubiquitous protozoan, known for its debilitating effect on humans, particularly those already weaken by marginal diets or other diseases. In the subphylum Sarcodina of the same phylum we find the amoebas, with some members of the genus Entamoeba causing severe or fatal amoebic dysentery. Among the Apicomplexa, perhaps, the best known are the genera Plasmodium, some of whose species are responsible for malaria, and, Toxoplasma, causal agent of a trans-placental degenerative disease in unborn children. Finally amongst the Ciliata we find Balantidium coli, an intestinal parasite of humans, pigs, rats and many other mammals, which may cause dysentery similar to that of Entamoeba. The Labrinthomorpha is a small phylum that appears to be solely parasitic on macro-algae.

All of the above named groups, with the exception of the Labrinthomorpha, have representatives in other host organisms and routinely wreak economic havoc amongst cattle, sheep, goats, chickens, fish, bees, and other domestic animals. At least one group of protozoan parasites, normally associated with animals, has managed to cross a barrier and now utilizes plants as its final host. This is the trypanosomid genus Phytomonas. Members of the genus may cause heavy losses to coffee trees, various palm trees, and even tomato crops.

With the advent of intensive aquaculture, members of some groups of Protozoa have become major problems to fish, prawn and shellfish rearing. An additional problem here in Bangladesh has been the indiscriminate introduction of exotic aquatic species (or populations of the same species) leading to the introduction of exotic parasites which may decimate the native populations.

Many protozoans are regarded as host specific (occurring in only one host species), however, a number may have other host species which act as reservoirs making it even more difficult to control the diseases they cause. Examples of these are: Leishmania donovani donovani, the causative agent of Kala-Azar, found commonly in humans, dogs and foxes; Trypanoplasma gambiense, a causative agent of sleeping sickness, found in humans, monkeys, dogs, pigs, antelopes and others; T. rhodesiense, the second of the two sleeping sickness agents, found in humans, wild game, and pigs; and, Cryptosporidium sp. found in humans, monkeys, the young of cow, sheep, goats, pigs, fowl, rabbits, cats, and mice.

Furthermore, there are a number of protozoan parasites normally occurring in other animals that occasionally may invade humans. Often when this occurs they lead to debilitating diseases.

A number of protozoan parasites that were relatively uncommon in humans have become significant causes of mortalities occurring in immuno-suppressed humans. This is particularly true of members of the subclass Coccidia of the Sporozoa, such as Cryptosporidium, and, Pneumocystis carinii, a protozoan of uncertain affiliation, which leads to pneumonia.

The life cycles of protozoans reflect the complexity of the phyla. Many alternate between sexual and asexual stages of reproduction, while sexual reproduction is not known for some. The forms of asexual reproduction are highly varied. Most species contain only a single nucleus, however some groups are multi-nucleate, and a few build colonies. Feeding and excretion occur via a number of mechanisms. Amongst the parasitic species some life cycles are direct, others require one, or more, intermediate hosts to complete their cycle. There may or may not be a free-living stage. Cysts are present in some species but not known for other closely related species of the same genus. Reservoirs may be present, or, the parasite may be host specific. The parasite reproductive cycle may be driven by the hosts hormonal system or the parasite may alter the behavior or capacity of the host.

The pathogen of at least four of the diseases listed as among the top ten most devastating in the world by the World Health Organisation are members of this subkingdom. [Glenn A Bristow and Qamar Banu]