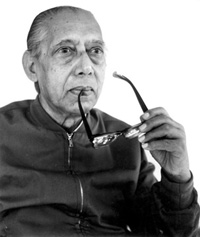 Qudrat-i-Khuda, Muhammad (1900-1977) scientist, educationist and writer. Born in village Margram of Birbhum district in West Bengal, Qudrat-i-Khuda received his early education from the Margram ME High School and Calcutta Woodburn ME School.

He passed the Matriculation examination from Calcutta Madrasa in 1918 in the First Division. In 1924 he obtained the MSc degree in Chemistry standing First in First Class, from Presidency College, Calcutta, and was awarded a gold medal for his brilliant result. Qudrat-i-Khuda also received a premchand roychand studentship for higher research in Chemistry at Calcutta University. He obtained the DSc in 1929 from London University for his research entitled ‘Stainless Configuration of Multiplanmet Ring’.

Qudrat-i-Khuda began his career as a lecturer in Chemistry at Presidency College in 1931 and was soon promoted to Head of the Department in 1936. From 1942 to 1944, he served as the Principal of Islamia College in Calcutta. He again returned to Presidency College in 1946, becoming the Principal of the college. At the same time, Dr Qudrat-i-Khuda was a Fellow and a Member of the Senate of Calcutta University. At the partition of India, he came to East Pakistan (now Bangladesh) in 1947 and served as the first Director of Public Instruction of the Government of East Pakistan from 1947 to 1949. In 1949, he was appointed Scientific Adviser to the Ministry of Defence of the Government of Pakistan. He became Chairman of the Secondary Education Board and served from 1952 to 1955. He was appointed the first Director of the East Regional Laboratories of the Pakistan Council for Scientific and Industrial Research-PCSIR (now BCSIR) in 1955 and established the laboratories in Dhaka. After retirement from Directorship in 1966, Muhammad Qudrat-i-Khuda was appointed Chairman of the 'Kendriya Bangla Unnayan Board' (Central Board for the Development of Bengali).

Muhammad Qudrat-I-Khuda's field of specialisation was organic chemistry. He conducted research on herbals, jute, salt, charcoal, soil and minerals. He successfully extracted biochemical elements from local trees and plants for medicinal use. Qudrat-i-Khuda and his associates patented 18 scientific inventions. Manufacturing of Partex from jute-stick was his greatest scientific achievement. Manufacturing malt vinegar from the juice of sugarcane and molasses, rayon from jute and jute-sticks, and paper from jute were his other significant scientific innovations.

Qudrat-i-Khuda played an important role in popularising Bangla for scientific practices. As such, he wrote a number of books on science and technology in Bangla including Vijnaner Saras Kahini (Interesting History of Science), Vijnaner Vichitra Kahini (Wonderful History of Science), Vijnaner Suchana (Origin of Science), Jaiba Rasayan (Organic Chemistry) in four volumes, Purba Pakistaner Shilpa Sambhabana (Industrial Potentiality of East Pakistan), Paramanu Parichiti (An Introduction to the Atom) and Vijnaner Pahela Katha (First Word of Science). Two Bangla science magazines 'Purogami Vijnan' (Pioneering Science; 1963) and 'Vijnaner Joyyatra' (The Victory of Science; 1972) were published under his auspices. He also wrote some religious books including Pabitra Quraner Puta Katha O Angari Jaoyara (The Holy Sayings of Quran and Angari Jaoyara). He played an active role in the liberation movement and helped in stimulating Bengali nationalism.

The Government of Pakistan awarded him the 'Tamgha-i-Pakistan' and 'Sitara-i-Imtiaz' in appreciation of his outstanding achievements. The Government of Bangladesh honoured him with 'Ekushe Padak' in 1976 and 'Swadhinata Dibas Puraskar' (Independence Day Award) in 1984 for his outstanding contributions in science and technology. Dhaka University conferred on him an honorary Doctorate degree for his outstanding contribution to science. Muhammad Qudrat-i-Khuda died in Dhaka on 3 November 1977. [Md Mahbub Murshed]