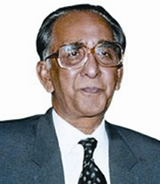 Rahman, Justice Muhammad Habibur (1928-2014) educationist, lawyer and jurist. He was born on 3 December 1928 at village Dayarampur in Jangipur subdivision of Murshidabad district in West Bengal. His father Moulvi Jahiruddin Biswas was a lawyer, and his mother was Gul Habiba. Habibur Rahman passed matriculation examination in 1945 from Jangipur High School and IA examination in 1947 from Presidency College in Kolkata. He obtained BA (Hons) in History in 1950, MA in 1951 and got LLB degree in 1955 from Dhaka University. Habibur Rahman obtained BA (Hons) and MA degree in Modern History in 1958 and 1962 respectively from Worcester College of Oxford University. He completed Bar at Law from the Lincon’s Inn in 1959.

Habibur Rahman began his career as a Lecturer in History in Dhaka University in 1952. Later he joined Rajshahi University where he subsequently held the office of Dean of the Faculty of Law (1961) and of Reader in History (1962-64). Habibur Rahman changed his profession in 1964 and joined the Dhaka High Court bar. In his legal career he held the offices of Assistant Advocate General (1969), vice president of High Court Bar Association (1972) and member of Bangladesh Bar Council (1972).

Habibur Rahman was appointed a judge of the High Court in 1976, and judge of the Appellate Division of the Supreme Court in 1985. He was the Acting Chief Justice in 1990-91 and was made chief justice of Bangladesh in 1995. His juristic competence is demonstrated in his opinions and interpretations as pronounced in many of the Bangladesh Supreme Court’s decisions concerning vital issues, such as, admiralty jurisdiction, amendment of the Constitution, citizenship, habeas corpus, administrative tribunals and court jurisdictions.

Habibur Rahman retired from service as Chief Justice of Bangladesh in 1995. As per constitutional provision, he as the last retiring Chief Justice took oath as Chief Advisor of the caretaker government for conducting the elections of the jatiya sangsad in 1996. As Chief Adviser it was for him to guide the nation into the future by taking the right path a mid the confusion for the crossroads. He did the job marvelously well despite the threats and dangers lurking in the bushes. Justice Rahman did what was expected of him he stood firm in his resolve to preserve democracy, and democracy was saved through general election held in June 1996.

Justice Rahman was awarded bangla academy Prize for Literature in 1984, Ekushey Padak in 2007 and a number of awards from other concerns. He was a Fellow of the asiatic society of bangladesh; Fellow of the Bangla Academy; Honorary Bencher, Lincoln’s Inn; and Honorary Fellow, Worcester College of Oxford University.