Rahman, Mashiur (1920-1971) lawyer, politician, martyr in the War of Liberation. He was born in 1920 at village Singhajhuli in Chaugachha upazila of Jessore district. He passed Matriculation examination in 1938 from Jessore Zilla School, IA and BA from Calcutta Islamia College, and obtained BL degree from Calcutta University in 1944. 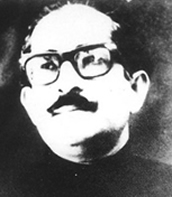 He was a member of the Awami League working committee in 1953-1956. He was a minister in the cabinet of Ataur Rahman Khan in 1956 and was in charge of the Ministry of Publicity, Parliamentary Affairs, Revenue and Local Government. He was arrested after the promulgation of martial law in 1958.

Mashiur Rahman had significant role in revitalizing the Awami League in 1964. In 1967 he was elected vice president of the Pro-PDM Awami League. But during the anti-Ayub movement in 1968 he came back to the main stream Awami League. He gave legal support in favour of bangabandhu sheikh mujibur rahman in agartala conspiracy case. He was elected a member of the National Assembly in 1970 from Jessore-3 constituency as a candidate of Awami League. In March 1971, he gave lead to the non-cooperation movement of Bangabandhu in Jessore.

On the night of 25 March, a group of Pak army arrested Mashuir Rahman and took him to Jessore cantonment. Mashiur Rahman was killed by the Pak army in the cantonment on 25 April 1971.