Rajshahi Raj occupied a predominant position among the territorial magnates of Bengal in the 18th century. It was the second largest zamindari with an area of about 33,670 sq km. The zamindari came into being during the early part of the 18th century. At that time Nawab murshid quli khan was the nawab of Bengal (1704-1727). A man of strict principle, he maintained rigorous discipline in every aspect of his administration. Owing to nawab's stern revenue policy as well as for the zamindars' maladminisstration and their failure to pay the stipulated revenue dues in time, many old zamindars lost their zamindaries. Besides, many zamindars lost their zamindari on account of their disobedience and rebellion. Murshid Quli Khan settled these zamindaries with his trusted followers and cronies. In this process of replacement the most fortunate beneficiary was the Rajshahi zamindari (also called natore raj). The family also benefited by another feature of nawab's revenue policy of encouragement to the formation of big zamindaries.

The Rajshahi Raj family traced its origin to one Kamdev Rai, a tahsildar of Baraihati in Pargana Lashkarpur, under Puthia Raj family. Kamdev had three sons Ramjivan, Raghunandan and Bishnuram. Of the three brothers, Raghunandan was the most promising and enterprising. Darpanarain, the zamindar of Puthia, and Murshid Quli Khan had significant contributions behind Raghunandan's rise to prominence. 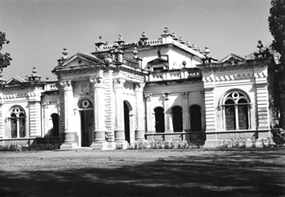 Darpanarain appointed Raghunandan his wakil at Jahangirnagar (Dhaka), the capital of Bengal. Raghunandan sided with Murshid Quli Khan in his entanglement with the Subahdar azim-us-shan and thus won the confidence of the former. Again, when the diwani was transferred to murshidabad, he was appointed in a similar capacity as his master's representative there. Raghunandan, a man of parts, soon caught the attention of the Sadar Qanungo at Murshidabad, who appointed him deputy or Naib Qanngo for his sound knowledge in finance and law. During this time he came in close contact of Murshid Quli Khan and secured his great trust and confidence.

As a confidant of Murshid Quli Khan, Raghunandan secured a portion of the Rajshahi zamindari in 1706, in the name of his brother Ramjivan. Banugachi was added to the family as its former zamindar had mismanaged his estate and become a regular revenue defaulter. Then gradually followed the additions of the pargana Bhaturia (1711) and Niz-Rajshahi (1713). Soon after this the diwan bestowed pargana Naldi upon Ramjivan. When Sitaram, the zamindar of bhusna, revolted against the diwan's authority and oppressed smaller zamindars and stopped paying revenues to the treasury, Murshid Quli Khan sent a strong force against Sitaram and suppressed his rebellion. In this campaign against Sitaram, Ramjivan, the founder of Natore Raj and his diwan Dayaram cooperated. As a reward for their services Murshid Quli granted Ramjivan the whole of Bhusna together with pargana Ibrahimpur in 1714. In fact, the rise of the Natore family was established with the dismemberment of Sitaram's estate.

After the subjugation of the refractory Afghan chiefs the nawab settled Tanki Sarubpur with his favourite Ramjivan (1718). Ramjivan by this time earned nawab's confidence by his efficient management and punctual payment of revenues. Thus, by these successive additions, the vast Rajshahi zamindari was built up during the lifetime of its founders. It became the second largest zamindari of Bengal after Burdwan. Tradition called it an estate of 52 lakh of rupees.

Although Raghnandan at Murshidabad was the founder of the Rajshahi zamindari, but its successful consolidation and management was largely due to his elder brother Ramjivan and his diwan Dayaram, a first rate man of business. Raghunandan died in 1724 without leaving any heir. His death was followed by that of Ramjivan in 1730. Before his death, Ramjivan had adopted Ramkanta as his son and successor. In 1730 Ramkanta inherited the entire zamindari of Rajshahi at the age of 18. Thoroughly inexperienced in zamindari administration, he, neglecting the zamindari affairs, passed most of his time in religious activities. Fortunately, rani bhabani, his wife and a lady of great foresight, sagacity and intelligence, efficiently managed the zamindari with the help of trusted diwan Dayaram.

Ramkanta died in 1748, leaving behind his wife and only daughter Tara. But before his death, he allowed the Rani to adopt Ramkrishna. Thus the Rani, a lady of many virtues and capacity, as the real zamindar of Rajshahi managed it quite efficiently and increased its revenues substantially. She maintained cordial relations with the nawabs of Murshidabad. When the east india company was granted the Diwani administration of Bengal in 1765, they found the zamindari of Rajshahi in peaceful and prosperous conditions and as such did not disturb her, and kept her in the possession of her zamindari. The Rani upheld the dignity and prestige of the zamindari by supporting welfare activities.

Only a dozen large zamindars controlled half of the total landed property of Bengal while the colonial state was forming in the last decades of the eighteenth century. The colonial state viewed these princely zamindaris as potential threats to the security of the new state, because their wealth and influence were so great that they could at any opportune moment combine and put the colonial state in great jeopardy. Hence it became a policy of the government to weaken these estates, if not destroy them altogether. One of the strategies to implement this design was the ruthless operation of the Sunset Law or the revenue sale law of 1793.

In 1788, in her old age, Rani Bhavani transferred the zamindari to her adopted son Raja Ramkrishna, then forty years old. In 1791, the Decennial Settlement was concluded with him at a jama of Rs 22,52,200. Since the decennial settlement, the Rajshahi zamindari suffered from three pernicious problems: over assessment, mismanagement and the intrigues of amla (officers). The dismemberment of the zamindari started immediately after the decennial engagement. Before the dawn of the next century, the entire zamindari had been transferred to fresh hands except some few parganas the total revenue demand on which hardly exceeded Rs 34000 in 1800.

As the resources of the zamindari had never been investigated minutely, it is difficult to state categorically whether or not the zamindari was properly assessed. The original decennial assessment exclusive of all deductions on different accounts was S Rs 20,27,200. To this sum was added a rasad (increase) of S Rs 2,25,000. Hence the permanet assessment of the zamindari was fixed at S Rs 22,52,200. The average annual collection of the estate from 1778-79 to 1788-89 amounted to S Rs 21,24,400. The gap between the known revenue yield and the assessment was further widened by the withdrawal without compensation of the customary allowance of batta on the payment in sicca currency. The raja had derived an annual income of about one lakh of rupees on account of batta and there had never been any hint in the decennial agreement that it would subsequently be resumed without compensation. Thus if to the gap between past revenue yield and the 1791 assessment is added the loss of the batta alowance, the raja may be seen to have been overburdened by the decennial settlement by about two lakhs of rupees a year.

Raja Ramkrishna at first refused to accept the settlement and persisted in throwing every obstacle and impediment in the way of the execution of the settlement. But ultimately he acceded to it with a note of protest. He wrote to the Council that he accepted the settlement only to avoid further displeasure from the government.

In these circumstances it was not surprising to find that Raja Ramkrishna lost two of his big parganas bearing jama of about one lakh and fifty thousand rupees within a year after his decennial engagement. This, however, did not relieve him from further distress. Every year arrears were accumulating. In July 1795, his outstanding arrears amounted to S Rs 5,39,054. Stating his difficulties, the raja wrote to the Council for abatement of the revenue demand. But his appeals were turned down.

The repeated representations of Ramkrishna ventilating his difficulties in paying public revenue and his chronic arrears, led to a full-scale discussion in the Council about the affairs of his zamindari and opinions of the collector and from the Board of Revenue were sought. The Collector, giving his report in favour of the raja said that his zamindari was overrated by at least half the amount of rasad imposed on him. But the Council was not prepared to scale down the government demand. The raja's incompetence was blamed for arrears. In fact, the government was determined to dismember the large zamindari into numerous and easily manageable smaller estates. The Government's failure to collect the substantial amount of its demands in spite of the use of all administrative machinery at its disposal makes it clear that the resources of the zamindari were unequal to assessment.

The last phase of the zamidari was most tragic. In April 1798, Raja Biswanath attained his majority and took over the management of the zamindari. Soon he fell in huge arrears for which mahal after mahal were sold for recovering public revenue. By 1800, the great Rajshahi raj was reduced to insignificance. Utter poverty descended on the family. In consideration of his past rank and status and present indigence, the Government granted him an allowance of eight hundred rupees per month in 1805. A zamindari which was the second largest in Bengal, just next to the Burdwan raj, in 1790 became almost extinct within the next ten years.

It was the overassessment which made the zamindari helpless. The raja stood little chance of getting rid of debt balances and consequently sale of his lands continued. But over assessment was certainly not the whole truth behind the dissolution of the zamindari. The raja's own character was also a significant contributory factor. As a believer in the Vaisnava cult, Raja Ramkrishna was always engrossed in spiritual meditation oblivious of zamindari affairs. He used whatever leisure he managed to have after meditation and other religious duties in composing popular vaisnava songs which earned him the title 'Raja-saint' of Bengal.

Ramkrishna's utter indifference towards the zamindari management made him absolutely dependent on his amla who gradually became so powerful that the raja lost control over them. The members of the zamindari bureaucracy in league conspired to fatten themselves at the expense of their master.

Raja Biswanath, however, tried to save some parts of his zamindari through benami purchases. Thus he bought pargana Naldi and Santore, which bore a combined jama of about one lakh rupees, in the names of his peons; but ultimately some of these had to be disposed of in order to clear off debts. His grandmother, Rani Bhavani, purchased Huda Hurer Para, Tarraf Dakhin Jowar and Huda Barnagar in Murshidabad district in her own name. Their combined jama stood at S Rs 33,706. These benami purchases, together with the purchases of Rani Bhavani, saved this historic family from total extinction. In 1819, the sadar jama of the zamindari on all accounts amounted to Rs 88,006.

The Rajshahi Raj witnessed its rise almost throughout the eighteenth century, but its decline started even before the century ran out. It somehow maintained its precarious existence during the next century. The zamindari was ultimately abolished under the east bengal state acquisition and tenancy act, 1950. [ABM Mahmood and Sirajul Islam]