Remote Sensing acquiring information about material objects from measurements made at a distance, without coming into physical contact with the object. Usually an aircraft or satellite does the process. Remote sensing technology may be divided into three phases: (i) data collection from a sensor mounted on a platform eg, a satellite; (ii) data handling; (iii) data interpretation which end up in generating some thematic maps of the investigated surfaces. A remote sensing system using electromagnetic radiation has four components - a source, interactions with the earth's surface, interaction with the atmosphere and a sensor. The source of electromagnetic radiation may be natural, like the sun's reflected light or the earth's emitted heat, or man-made like microwave radar. Earth's surface interaction, that is the amount and characteristics of radiation emitted or reflected from the earth's surface, is dependent upon the characteristics of the objects. Electromagnetic energy passing through the atmosphere is distorted and scattered, treated as atmospheric interaction, and the electromagnetic radiation that has interacted with the atmosphere and the surface of the earth is recorded by a sensor, such as a radiometre or camera. 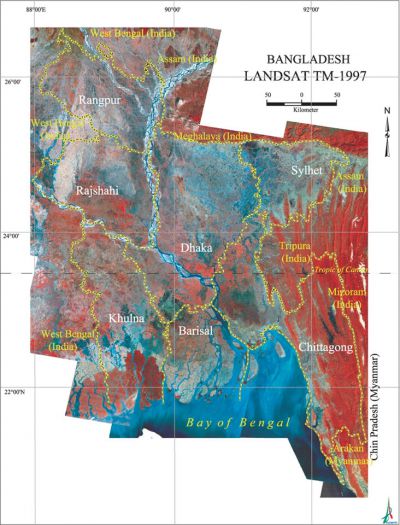 On the basis of techniques, there are three types of remote sensing platforms. Aerial photography is the earliest method of remote sensing and even in today's age of satellites and electronic scanners remain the most widely used type of remotely sensed data. Aerial photo means sensing the image of earth's surface through cameras fitted in an aeroplane or balloon. These photographs are very much useful for preparing largescale maps and military purposes. Aerial sensor imageries are collected using radar. It is a high-cost technique and mainly used for military purposes. Satellite remote sensing is a modern innovation. Remote sensing satellites have been designed according to the application, for use in either the study of earth's resources, meteorology, communication, or military purposes. 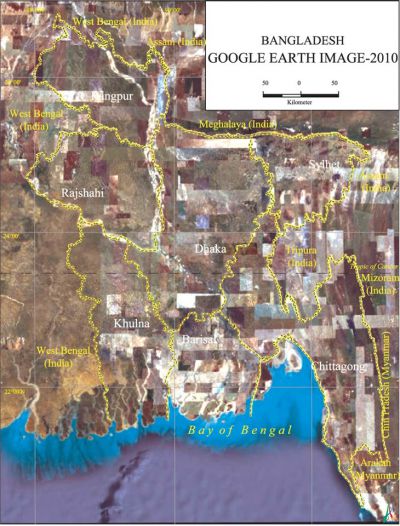 In Bangladesh application of satellite data started in the early 1970s with the creation of a research organisation called Space Research and Remote Sensing Organisation (sparrso). At that time, Bangladesh used to receive Earth Resources Technology Satellite (ERTS) data, which later changed its name as Landsat, on a regular basis free of cost. SPARRSO had established data receiving station for Landsat series and later for SPOT series in the mid-1980s but none are operational, primarily due to lack of regular funding. Apart from SPARRSO, satellite data are being regularly used by the universities, research organisations (eg, ISPAN/EGIS), and government organisations, Soil Resources Development Institute, bangladesh water development board, Bangladesh Meteorological Department for a wide range of applications in land and water sectors, and weather forecasting. The most common applications of remote sensing data in Bangladesh are centred on the following subsections: geology, meteorology, agriculture, forestry, statistics, fisheries, oceanography, cartography, water resources, and instrumentation. In the early 1970s and 1980s Landsat MSS data were used for land use and land cover mapping and hydro-geomorphological interpretation. In the later stage new generation superior product of Landsat TM data and SPOT images are being used for a wide range of applications in Bangladesh. At present IRS-1C PAN data (the highest resolution within the earth's resources satellites, 5.8m ground resolution) are being used for research. [Mohd Shamsul Alam and Masud Hasan Chowdhury]