Ross, Ronald (1857-1932) Nobel Prize winner in Medicine for his discovery of the cause of Malaria. He was born on 13 May 1857 at Almora, a hill station in the North Western Provinces of British India. His father Sir Campbell Claye Grant Ross was a General in the Indian army and his mother was Matilda Charlotte, eldest daughter of Edward Merrick Elderton, a London Lawyer. At the age of eight Ross was sent to England for education. After completing his early education in two small schools at Ryde, he was sent to a boarding school at Springhill, near Southampton in 1869. 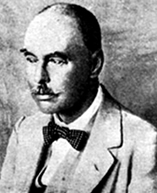 Ross was interested in zoology but also wrote verse. In fact, he wanted to become an artist, but his father urged a medical career upon him. Ross, therefore, entered London’s St Bartholomew’s hospital and then qualified for the Royal College of Surgeons (MRCS) in 1879. After failing once, he became a Licentiate of the Society of Apothecaries (LSA) in 1881. He joined the Indian Medical Service, again at his father’s wish. In 1888 he went to England for his first leave and married Rosa Bessie, daughter of Alfred Bradley Bloxam in 1889.

In 1894, on his second leave to England, Ross was introduced to Sir Patrick Mason who showed him the parasites of human malaria discovered by Alphonse Laveran in 1880. Mason himself had found in 1878 that certain mosquitoes could serve as the intermediaries for the human filarial parasites and now hypothesised to Ross that malaria might also be mosquito-borne. Ross returned to India next year and with Mason's encouragement and advice continued his research until he observed a cyst containing granules of black pigment in the stomach wall of a type of mosquito known as anopheles on 20 August 1897. Some months later Ross was able to study the parasite life cycle in caged birds and demonstrate that malaria could be transmitted from infected to healthy birds. This proved beyond doubt that malaria was not contacted from air or water but was an infectious disease transmitted from man to man by mosquito bites. Since Battista Grassi and his Italian colleagues had worked on the life cycle of the human malarial parasite, a bitter controversy erupted on the question of who had discovered the cause of malaria first. The award of the Nobel Prize to Ross in 1902 settled much of the debate.

Ross retired from the Indian Medical Service in 1899 and returned to England. He became Lecturer at the School of Tropical Medicine at Liverpool (Professor; 1902-1912) and in 1912 moved to London to take up a consulting practice. Much of the rest of Ross' life was occupied with public health programmes for eradication of malaria. He organised and led extensive campaigns against malaria in various countries and wrote a number of tracts including Instructions for the Prevention of Malarial Fever for the Use of Residents in Malarial Places; Mosquito Brigades and How to Organise Them; Prevention of Malaria and also his Memoirs (1923); various mathematical studies, plays, dramas, novels and poems.

Scientific Institutions of various countries conferred honours on Ross. In 1901 he was elected a fellow of the Royal Society and was awarded a Royal medal in 1909. In addition to winning the Nobel Prize for medicine in 1902, he received honorary degrees from several universities. After 1912, he held the dual responsibility of the physician for tropical diseases at King's College Hospital and Professor of Tropical Sanitation at Liverpool. He was editor of Science Progress from 1913 till his death. During World War I, he became consultant in malaria to the War Office. Ross became the first director of the Ross Institute and Hospital for Tropical Diseases at Putney, founded in 1926. In December 1933 the Institute was united with the London School of Hygiene and Tropical Medicine.

Ross died on 16 September 1932 after a long illness. He was buried beside his wife (who predeceased him in 1931) at Putney Vale Cemetery. [Sujata Mukherjee]