Rover Scout (Rovering) the senior most branch of the Scout Movement, was opened in 1918 with the young men of 17 to 25 years of age. Lord Baden-Powell (BP) founded the Scout Movement in 1907 with 21 boys (11-17 years) in a formal camp at Brown Sea Island in England. Enumerating the motto and the training guidelines BP published a book named Scouting for Boys. Immediately the book had great impact on the boys. As a result scouting was spread over the world within 1909. As girls came forward BP opened Girl Guides in 1910. With the interest of boy-child of 6 to 11 years of age BP established Cub Scout. To train up Cubs BP published The Wolf Cub Handbook in 1916. With the young men of 17 to 25 years of age BP established Rover Scout in 1918. To generate self-development of Rovers BP published Rovering to Success in 1922. Thus Cubing, Scouting and Rovering are the three branches of scouting. At present the number of scouts in the world is approximately 28 million. Today scouting is active in 216 countries and territories of the world. For successful functioning of scouting World Organisation of Scout Movement (WOSM) was established in Geneva in 1920, which has six continents based regions. Currently WOSM has 155 member countries including Bangladesh in the Asia Pacific Region. World Association of Girl Guides and Girl Scouts (WAGGGS) was established in 1930 to operate Girl Guides, which has 4 centres. 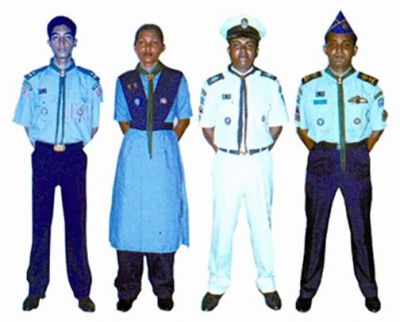 According to Baden Powell Rovering is a brotherhood of service in the Open Air. Rovering is the lifelong devotion to social development and service, which can be achieved through acquiring skill and human qualities in different sectors. It is such an experience where young men acquire good citizenship through participating in social service and community development programme.

For successful functioning of Rovering BP included a programme (syllabus) and some rules in his books. There is a trained Rover Scout Leader for guiding every rover unit. Every Rover group has a Rover Den (office) to develop and undertake programme based planning. Rover programme is based on a three and half year's long syllabus (two year programme for National University students). Rover activities are divided into four stages: Rover Squire, Membership, Training and Service. In these stages Rovers are trained in scouting, service and development works and engaged to serve the humanity and social development. The main theme of scouting is to implement Scout Law and Promise. In Promise Rovers take the oath to try their best to do their duty to the Almighty and to the country, to help other people at all times and to obey the Scout rules. There are seven Scout rules: a scout's honour is to be trusted, a friend to all, courteous and loyal, kind to animal, cheerful, thrifty and clean in thought, word and deed. Rovers at college, universities and open groups are being trained up regularly by Scout rules.

The main theme of Scout rules is a gradual development system which includes: scout law and promise, learning by doing, patrol system, environment preservation, camping and hiking, pioneering and first-aid. They are being trained up in many other subjects and they take part in social service and social development. There is a badge for each skill to be gained as Service Training Badge, Rambler's Badge (100 miles walk on foot in five days), Scout Skill Badge, Project Badge (completion of a six month long profitable agricultural project) and Rover Instructor Badge etc. The highest honourable award to a rover is the President's Rover Scout Award. Till now 111 Rovers achieved this award in Bangladesh, among them 18 are from Dhaka University.

At Present there are 2200 Rover Scout groups in Bangladesh. Among them there are 207 in Dhaka district (171 under colleges and universities and 36 open groups). Scouting in Bangladesh is very strong. It may be noted that Bangladesh is one of the top five countries in the world in respect of the number of scouts, pervasiveness of scout activities and quality of scouting. [Md Ramjul Huq]